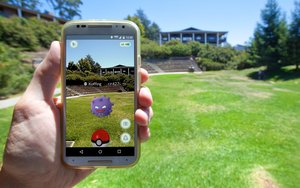 Led by the Pokemon Go craze, the augmented reality market appears to be continuing its upward growth.

The AR market is now projected to grow to more than 2 billion app downloads in the next five years, according to a new report by Juniper Research.

Although consumer-facing AR apps like Pokémon Go have high levels of awareness, the revenue driven by enterprise AR is higher and will lead the market in the next five years, according to Juniper.

The enterprise AR app market will grow to $5.7 billion in the next five years -- up from $515 million this year, according to Juniper.

“At the moment, consumer AR is obviously based on the smartphone, due to its ubiquitous nature, said Sam Barke, research analyst at Juniper and the author of the report. “However, the future of AR really does lie on other devices in both the consumer and the enterprise space. In the enterprise, we’re going to see people adopting smart glasses and head-mounted units over smartphones and tablets.”

This appears to be consistent with other studies about the future of augmented reality.

For example, another recent study by Citi projects that most of the growth of the AR market after 2025 will come directly from encroaching on the smartphone market.

That study also forecasts AR to move into commerce, ultimately capturing $1.3 trillion, and a quarter (25%) of the commerce market between 2025 and 2035.

Increasing efficiency for users and lowering costs will be the primary driver of AR adoption in enterprise, rather than generating revenue.

However, the success of non-smartphone AR devices for consumers comes down to appearance in addition to functionality, according to Juniper’s Barke

“If it wants to be successful in the consumer space, it has to look as if it’s not a smart glass -- the aesthetics of it really have to click.”

“If that doesn’t happen, then we’re probably not going to see very much uptake of it and then on top of that, we really need to see usability and content come to the fore.”