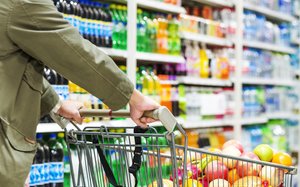 CPG marketers are missing the boat with dads, according to a study from Geometry Global.

While dads are under the impression that they share the majority of household responsibilities — including shopping — they believe that CPG ads are marketed to them very rarely. The study also finds that 41% of dads switched brands when they became a parent or in preparation for becoming a parent, and that dads spend 15% more than mothers on household supplies per shopping trip.

“Millennial fathers are not like their parents, and they are also not like their wives,” LaRock tells Marketing Daily. “Marketers need to truly understand what motivates all their consumers if they want to inspire them to buy their products so they should be creating unique programs that are relevant to these fathers.”

Price is a key consideration for dads only 65% of the time versus 84% of the time for moms. And, dads give a thumbs-up to organic brands. Of the 41% of dads who switched brands when they became a parent or in preparation for becoming a parent, 43% of them switched to organic products.

"What surprised me was how much fathers appear to change their behavior once they have a child, in some ways even more than the mother, and how they are redefining fatherhood,” LaRock says. “No doubt that having a baby changes your life, but this research shows that this even changed people’s shopping patterns in terms of where they shopped and what they bought.”

Notably, 38% of dads don’t believe brands/retailers portray the way they view their role as a parent accurately. Dads spend 15% more than mothers on household supplies and groceries per shopping trip, yet less than 7% of advertisements are geared (predominantly) to men.

"This research reveals that fathers today are what I call ‘in the now Dads’ -- they are very contemporary in the way they want to spend every moment with their kids as well as their approach to parenting and shopping,” LaRock says. “In the now Dads” are not carbon copies of their wives -- they are reinterpreting parenting and doing it their own way."

To gain a better understanding of the Millennial parent -- both mom and dad -- shopper marketing agency Geometry Global conducted a survey of 645 parents (ages 18–35 with children ages 0-13) that focused on their perceived household responsibilities and shopping behavior.