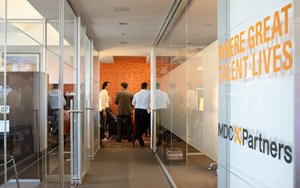 The ad-marketing holding company is suspending its quarterly dividend, lowering its guidance, and has hired LionTree Advisors to assist in evaluating its financial and capital structure strategy.

The hiring of an outside financial advisor is often a signal that a company is putting itself up for sale, although MDC officials denied that was the case, at least for now.

The company reported a net loss of $33.5 million in the quarter, versus an $8.6 million loss in the prior year period. This year the loss included an impairment charge of $29.6 million predominantly related to its experiential business.  Adjusted earnings before interest, taxes, depreciation and amortization decreased 13.5% to $46.3 million.

"This performance just isn't good enough," Kauffman said on the conference call. "We are taking actions to fix it."

Currency fluctuations slightly hindered the firm’s earnings, but the impact was less than 1%. Continued softness in the financial category-- which accounts for 6%-7% of MDC’s business--as well as uncertainty in the travel and leisure categories impacted the company’s bottom line.

International was a particular bright spot, up 19% driven by agency Swedish agency Forsman & Bodenfors which MDC acquired earlier this year.

Although the new business pipeline remains robust, says Kauffman, there were few meaningful new decisions and MDC began to feel the impact from notable client departures.

The on-going SEC investigation has accrued $3.6 million in legal expenses this year.

MDC has taken a "hard look" at its real estate portfolio, which is its second highest cost after people. The company is consolidating its media operations under one roof in Manhattan, which will save $3 million annually starting next year.

The suspension of the dividend will free up over $11 million in cash per quarter, which MDC plans to allocate toward enhanced liquidity, accelerated de-leveraging and investment in growth initiatives.

Other cost-saving moves include maximizing economies of scale across its partner portfolio, eliminating back office work, and reducing corporate costs. In addition, MDC will not be active in the acquisitions market for the foreseeable future.

"It's been a difficult five months for us" Kauffman said, acknowledging that investors and shareholders have a "lack of confidence and we own that. That doesn't change the underlying value of what we have built.”

During the call, analysts pushed MDC to further explain what exactly it hired LionTree to do. Company officials insisted that at this time, LionTree is tasked solely with examining the firm’s capital structure. Analysts, however, wonder if the assignment also includes exploring a possible sale. As one said, "It is not best time to sell a business. You want to do it when the ducks are quacking but it might be a better alternative." Others mentioned equity dilution and bankruptcy as possible options. MDC declined to delve into more details.