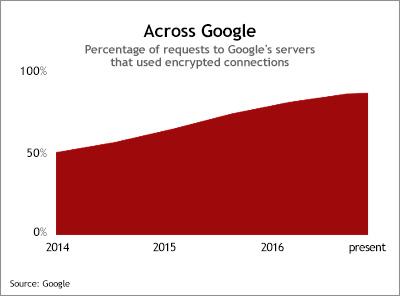 The Internet is increasingly becoming more secure for ecommerce and other transactions, according to Google. The Mountain View, California company has added a new section to its HTTPS Report Card in its Transparency Report to prove it. The report shows how the use of the protocol continues to increase over time. In fact, more than half of pages loaded and two-thirds of time spent by Chrome desktop users happen via HTTPS.

Internet users of Chrome on desktop spend a greater amount of time on HTTPS pages than on HTTP pages -- a rate that is increasing across both mobile and desktop.

The use of HTTPS by brands and companies only helps to increase trust among consumers looking for a secure online server to transact ecommerce. The NPD Group's 2016 Holiday Purchase Intentions Survey estimates that 71% of consumers plan to do some of their holiday shopping online this year.

NPD estimates that online shoppers anticipate spending an average of $710 each this holiday season, roughly 60% more than the $440 who plan to just buy in stores.

Google has measured the increase in HTTPS connections since early 2015, with help from Chrome browser users who share statistics. The metrics allow Google to improve user experiences and determine how to improve the interface.

The move to HTTPS increases secure transaction for ecommerce. Adrienne Porter Felt and Emily Schechter from Google's Chrome Security Team write in a blog post that Internet users also benefit from new features such as offline support and Web push notifications, and existing features such as credit card autofill and the HTML5 geolocation API that are too powerful to be used over non-secure HTTP.

It has helped Internet sites and companies such as CNET and Wayfair, respectively. Brian Wood, director of marketing of SEO at Wayfair, a large retail site, managed to migrate Wayfair.com to "HTTPS with no meaningful impact to Google rankings or Google organic search traffic.