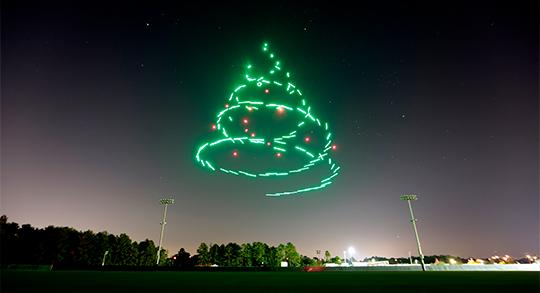 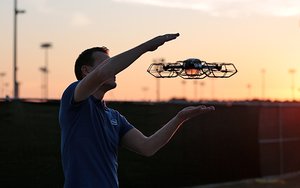 The Internet of Things is not only a land-based phenomenon, but major brands are looking to use hundreds of drones at a time to produce messaging in one form or another.

Earlier this month, Intel showed its video of 500 drones flying in formation at night in Germany. The LED lights on the drones spelled out the word ‘Intel.’

That was the first known example of a mass of hundreds of drones being used to portray a company logo in the sky at night.

A version of that drone light show is now moving to Walt Disney World in Orlando.

Using Intel’s ‘Shooting Star’ drones, Disney will use 300 drones in a choreographed aerial performance set to holiday-themed music over the holidays.

An aerial ballet of holiday animations will be created by the drones in what Intel says is the first time a show-drone performance of this scale is performed in the U.S. The ‘Starbright Holidays’ performance will be accompanied by a specially orchestrated score of season classics.

Weighing just over half a pound each, the quadcopters carry LED lights that can create more than 4 billion color combinations and can be programmed for any animation. The fleet of drones can be controlled by one computer and one pilot.

Intel and Disney teams worked on creating the show for more than five months. No word on how long each 300-drone light show will be, but certainly under 20 minutes, since that is the maximum flying time for each drone.

These and other advertising drone efforts are still relatively early, though rapidly becoming more sophisticate and Disney is hardly alone in taking marketing to the skies.

A Swiss company called Aerotrain has an inflatable drone that can fly above crowds and can be used for aerial advertising and an ad agency in South America connected drones to headless mannequins and flew them by office windows of people working late to promote men’s shirts.

Another company has created a system that can hang banners from drones and fly them over events and businesses.

Drones are essentially making advertising much more portable, expansive and mass targeted while extending the meaning of out of home.

And this winter, visitors at Disney World will start to see some of the potential.