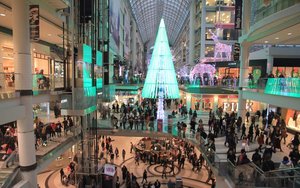 Black Friday ushered in a new era in holiday shopping, in what looks to be a win-win-win: Slightly smaller-than-usual crowds still packed the malls. E-commerce sales rose sharply. And mobile had its breakout moment, with m-commerce shattering expectations.

While physical traffic declined, the National Retail Federation says that over the entire weekend, 154 million consumers shopped either in stores or online — up from 151 million last year. They spent roughly $289 each, down from $300 last year. “We believe the decline in sales is a result of all the great deals offered by retailers,” says Matthew Shay, the NRF’s CEO, in a conference call Sunday afternoon.

Almost a third of shoppers say they bought 100% of their items on sale; that number is up 11% from last year. And while there was less news about stampedes or people standing in line at midnight than in previous years, “we can say unequivocally that Black Friday is alive and well.”

Big money stayed home and chased Internet deals. Adobe Digital says that between Thanksgiving and Black Friday, U.S. consumers spent $5.27 billion online -- an increase of nearly 18% from last year. And proving that more of us love to shop in our pajamas, Black Friday e-shopping itself registered a gain of 21.6% to $3.34 billion, the first time to top $3 billion. Target claims it had record-breaking traffic on its site, and demand was heavy enough at both Macy’s and Express to cause site disruptions.

And while mobile commerce was predicted to do well, the extent of its impact was a surprise. ComScore, the cross-platform measurement company, for example, had predicted that the $1 billion mark would be shattered, but not until Cyber Monday. In Deloitte’s annual survey, 41% of respondents said they expected to use their phones to shop, up from 35% two years ago.

“Mobile is making every moment a potential holiday shopping moment,” says Jordan Rost, Nielsen’s VP-consumer insights. “You can sit on the couch with your family and still shop. You really can be two places at once.”

That dip in traffic is proof that, increasingly, omnichannel shopping has become as traditional as pumpkin pie, leaving consumers free to binge on The Gilmore Girls or spend more time relaxing with family. (It’s a trend retailers like REI, with its #OptOutside and “Will you go out with me?” effort, and TJ Maxx, with its new “Bring Back the Holidays” campaign, are trying hard to build on this season.)

“People do seem to be taking back the holiday and not heading out as early in the morning on Black Friday,” Summer Taylor, a retail consultant in Deloitte’s Orange County, Calif., office, tells Marketing Daily. “I got to the Glendale Galleria in Los Angeles by 5 a.m. and there was definitely a lull, and it didn't really pick back up until 10 a.m. or so. People’s perception is that Black Friday doesn’t have the urgency it once did, and that the same deals are available both in stores and online.”

The e-commerce domination also underscores the digital divide. Overall, online purchases account for a small (if still fast-growing) amount of consumer spending: In the first quarter of this year, it reached 16.5%, reports comScore, the highest ever. Yet many holiday surveys report that people plan to spend much more: Deloitte, for instance, predicts that 51% will be spent online.

“The dynamic behind that ongoing discrepancy is that we’ve got this growing base of a sort of online super-shopper,” says Nielsen’s Rost. “The people who shop online really shop online. They’re prolific. They live online.”

But with people able to shop from home, whether by phone or computer, and find deals so fluidly, he tells Marketing Daily that the upside is that takes some of the frenzied — and to many people, unpleasant—energy out of the mall, as people switch their focus from finding bargains to pure discovery. “Shopping becomes more fun again, and for many people, it’s like a sport or a game. It’s kind of the cherry on top of their experience — they get to find something they didn't know they were looking for, or to confirm that — even after researching online — that this is the thing they want to buy. It truly is an amplified experience.”