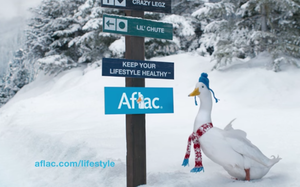 Aflac is targeting Millennials with a campaign that humorously reinforces the benefits of having supplemental insurance.

The effort includes a 30-second TV spot, “Ski Patrol,” that debuted during the 90th Macy’s Thanksgiving Day Parade. The ad is now airing on major networks nationwide. This is the first project for Aflac from new AOR, Publicis Seattle.

The campaign focuses on how changes in a person's health should not impact his or her lifestyle. The spot shows a skier breaking his leg. Ski patrol medics assess the injury as a "real moving-back-in-with-the-parents" situation. "It's a full-blown move into the basement," the medic tells the injured skier. "You're going to be out of work, and without that money from Aflac, you might miss your rent."

The actors used in the spot have improv backgrounds and improvised throughout the commercial shoot, says Gail Galuppo, senior vice president and chief marketing officer at Aflac.

“We were able to capture some unique, entertaining, snackable content for social media that we are excited to share with our younger audience, who we know relates well to humor, in the coming weeks,” Galuppo tells Marketing Daily.

The Aflac Duck makes a comedic appearance in the commercial, decked out in a ski hat and scarf to make sure everyone, including younger consumers, knows that health can change, but the life they love doesn’t have to.

The campaign aims to shine a light on the unforeseen impacts a single event can have on the life young adults love.

“We did a lot of research before creating this campaign and realized that many young adults didn’t understand how supplemental insurance works,” Galuppo says. “Once they learned how it could positively impact their lives, it was like a lightbulb moment. We want to help create that lightbulb moment for Millennials across the country.”

The campaign is being supported in traditional media channels, and will also extend itself to a variety of experiential executions. There is also significant focus on digital media to reach Millennials who predominantly consume content online.

It also includes search and online video advertising, social media posts and public relations support, including partnerships with a number of online influencers. Out-of-home advertising in New York City and cinema advertising will showcase the campaign on big screens.

The spot will air on a variety of networks, with heaviest spends on NBC and ABC during the holiday season including several holiday classic shows that trigger nostalgic memories for the target audience. Additionally, the ad will run on a range of other networks including The Comedy Network, ESPN, E!, Food Network and HGTV.

“It’s important for Aflac to help ensure this new generation of employees understands workplace benefits and how they can help protect their paychecks as well as their health and lifestyle,” she says. “However, while this campaign was created with this younger audience in mind, we did test it with an older audience and it resonated with them as well. No matter what age a person is, they don’t want anything to interrupt the life they love.”