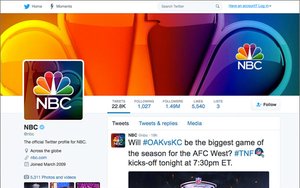 TV shows see the lion's share of social media activity coming from tweets from their TV viewers. But when it comes to efficiency per tweet, network-owned tweets do a better job.

But Nielsen says looking at each piece of “owned” content has a higher social media value.

For example, for October 2016, there were an average of 70 engagements with each “owned” tweet compared to just 8 engagements per original “organic” tweet.

In this regard, Nielsen says: “Networks have a unique opportunity with owned properties to create quality content, post it at the right time and promote it strategically to drive engagement.”

Nielsen measures U.S. Twitter activity for TV programs on English- and Spanish-language broadcast and national cable networks from three hours before through three hours after linear telecasts, local time, and on a 24-hour-a-day, seven-day-a-week basis.