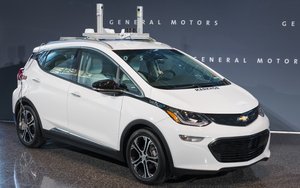 General Motors announced Thursday that it will produce the next generation of its autonomous test vehicles at its Orion Township assembly plant beginning in early 2017.

The automaker also announced that it will immediately begin testing autonomous vehicles on public roads. Testing has already been underway on GM’s Technical Center in a Detroit suburb, but with the passage of the SAVE Act by the Michigan legislature, it can be expanded to public roads on the facility’s outskirts. Within the next few months, testing will expand to metro Detroit, which will become GM’s main location for the development of autonomous technology in winter climates.

Workers at the Orion Township assembly plant will build test fleet Bolt EVs equipped with fully autonomous technology. The plant currently manufactures the Chevrolet Bolt EV and Sonic. The new equipment will include cameras, sensors and other hardware designed to ensure system safety.

The test fleet vehicles will be used by GM engineers for continued testing and validation of GM’s autonomous technology already underway on public roads in San Francisco and Scottsdale, Arizona, as well as part of the Michigan testing fleet. Ford, Uber and Alphabet’s Waymo are also testing autonomous vehicles on public roads.

Ford announced in August that it intends to have a high-volume, fully autonomous vehicle in commercial operation in 2021 in a ride-hailing or ride-sharing service. Uber has been testing autonomous vehicles with a safety driver in Pittsburgh. When it tried to expand the program to San Francisco earlier this week, it was barred by the California Department of Motor Vehicles.

As one of the world's largest manufacturers, GM needs to be at the forefront of autonomous vehicle development,  says Rebecca Lindland, senior analyst for Kelley Blue Book.

“They can leverage their global footprint to create products suited for different markets,” Lindland says. “The challenge is for consumers to believe one of the world's largest manufacturers can design and innovate such technology. Hopefully being early on road testing will convey that yes, they can and are innovating.”

In June, GM began testing autonomous Chevrolet Bolt EVs on the public roads in San Francisco and Scottsdale. The company has more than 40 autonomous vehicles testing in the two cities.