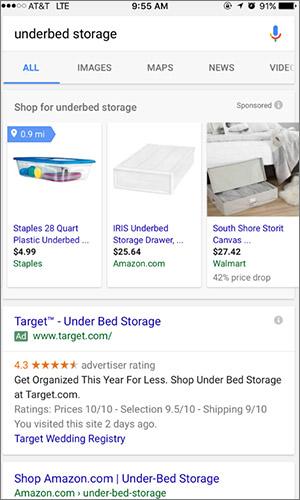 Amazon, which spearheaded using text and images across its marketplace, has been spotted running Google Product Listing Ads (PLAs).

PLAs have grown to dominate conversations from Google search results, basically because each combines an image and text.

"In Q4 2016, PLAs will produce just under half of all retailers’ Google search ad clicks, but between two-thirds and three-quarters of clicks on non-brand queries," Mark Ballard, senior research director at the agency Merkle.

The shift toward mobile also has generated interest in PLA. "With less competing real estate on phone results, PLAs also generate a higher share of ad clicks on mobile than desktop," Ballard wrote.

For the most part, marketers noticed Amazon running PLAs last week, but since then Ballard noticed a decline in the ability to trigger the ads.

"For about half of the programs I checked, Amazon is not listed at all, but for the others, Amazon first pops up on December 20," he wrote. "It is anecdotal, but Amazon seems to be showing up more consistently for home goods retailers."

Ballard believes that if Amazon ramps up running Google PLAs in "earnest" in 2017, it will have major ramifications for retailer search advertisers, as well as for Google and Amazon.

"If Amazon fully invests in Google PLAs, it will attract a large number of clicks at the expense of the vast majority of Google’s other PLA advertisers," Ballard told Search Marketing Daily. "These retailers will be forced to accept lower traffic levels or pay more per click to maintain their current PLA click volume."

He wouldn't typically expect one new competitor to have much overall impact on the search auction, but Amazon is unique in its scale and ability to offer products at the lowest prices, so its impact on the PLA market would likely be significant.

Jonathan Kagan, senior director of search and biddable media at MARC USA Results: Digital, agrees. He said the ramifications could be a diversion of budget away from Google and toward Amazon. In some cases Amazon would need to share its revenue with Google. "It's an algorithm tweak," he said.