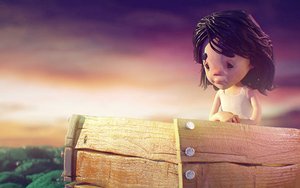 UNICEF is celebrating its 70th birthday by updating the plights of two child refugees who were originally introduced in March's Unfairy Tales campaign that reached a half a billion people through earned media across 176 countries. This effort also garnered more than 30 awards around the world, including the Cannes Lions Grand Prix for Good.

Now, the two films show how these children are integrating into their new homes in Germany. The clips mix animation with real footage over subtitles as the children discuss their current situations as well as what they miss about their lives that they left behind.

The films run across UNICEF’s social channels, including Twitter, Facebook and Snapchat, as well as form part of UNICEF’s #actofhumanity global initiative. In addition, Mustafa appeared at UNICEF’s 70th anniversary event at the United Nations in New York on December 12 that was broadcast live on UNICEF’s Facebook page.

The campaign was conceived and directed by ad agency 180LA. The films were produced with pro bono help from animation houses Consulado, House of Colors, Bubba’s Chop Shop and Gilles+Cecilie Studio, along with Media Monks, which produced interactive e-books and Circle of Sound and Therapy Studios on sound/music.

This is a passion project for the agency. 180LA is one of 51 companies that committed more than $650 million in the education, employment and enablement of 6.3 million refugees across 20 countries, just a portion of the roughly 21 million who have crossed international borders, according to the UN Refugee Agency (UNHCR).

“Nearly 50 million children are on the move – 28 million of them forced to flee their homes because of conflict. These children and their families are looking for stability, and a place to call home,” stated Paloma Escudero, director of communications, UNICEF. “Across the world, people are showing acts of humanity to migrant and refugee children, welcoming them into communities and schools. These small acts of kindness can make all the difference to individual lives and we encourage more people to show empathy towards children on the move.”