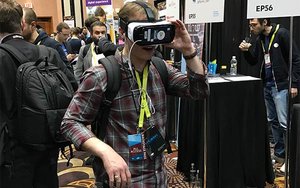 Consumer awareness of virtual reality and the brands involved increased across the board after the holiday season.

The number of consumers who said they are very familiar with virtual reality almost doubled between September of last year and January, according to a new study.

A quarter (25%) of consumers said they have tried VR after the holidays, up from just 5% in September.

Most (83%) consumers said they have a positive attitude toward VR, up from 72% last year.

Almost a third (31%) of consumers now say they are very familiar with VR, up from 16% last year.

Brand awareness increased across the board for the major VR headsets as well.

More than half (58%) of consumers now say they have heard of Samsung’s Gear VR, up from fewer than a third (31%) last year.

In less than a year, Samsung captured the top spot in first brand coming to mind, held by Sony last year at 13% awareness, even though more people overall had heard of Samsung than Sony last year.

More than 5 million Gear VR headsets have been sold globally, Samsung said during a presentation at CES.

Two developments within the VR systems landscape did happen between the two surveys, however.

More than 6 million PlayStation 4 units were sold throughout the holidays, bringing the global number of PlayStation 4 consoles sold to more than 53 million, according to Sony.

The number of PlayStation VR units sold is unclear, although some estimates have been lower than initially projected, as the IoT Daily recently reported (VR Sales Lower Than Projected, Samsung Still Leads Market ).

Google’s Daydream VR platform has been limited in compatibility since only Google’s Daydream View headset and controller and select smartphones have been supported. However, the ecosystem just expanded with Huawei, Asus and ZTE launching new ‘Daydream-ready’ smartphones and headsets at CES.