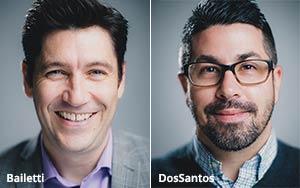 In this newly created position, he will lead global performance analytics and work with various clients, such as BMW, EasyFinancial and Mackenzie Investments to enhance ROI.

Founded in 2014, GALE currently has offices in New York, Toronto and Bangalore.

As part of the global leadership team, Bailetti will bring in new talent to build out the performance-marketing team, as well as connect with the agency's other platforms and disciplines.

He will split his time between Toronto and New York, reporting to GALE’s president and CEO Brad Simms.

Most recently, Bailetti served as VP, data science for SapientRazorfish, where he worked with Walmart and J.M. Smucker among others. In October 2015, he received the ANA Genius Award for Excellence in Digital Marketing Analytics.

Bailetti's colleague Shawn DosSantos is also leaving SapientRazorfish to become GALE's associate creative director. In this new role, he will be based in New York and lead strategic creative solutions for agency clients BMW and SodaStream.

DosSantos also worked as associate creative director at SapientRazorfish, with clients including Ford Motor Company, Mercedes Benz and Lincoln Motor Company. Previously, he was at DDB Worldwide, where he oversaw the Electrolux account and supported the New York Lottery account.

Earlier, he worked at experiential agency Jack Morton, where he developed set designs around "The Daily Show," "The Colbert Report" and ESPN.