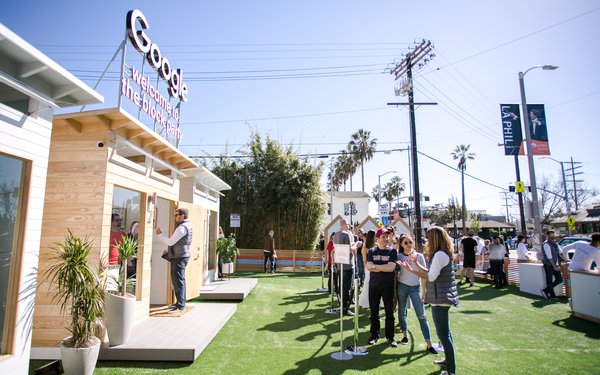 Google and experiential agency Grow Marketing are headed to Chelsea Market in New York next week to show off Google Home and Google Play Music. The duo set up the device and service in three tiny homes.

Greeting visitors at the doors of the tiny homes are Google's representatives who demonstrate how YouTube influencers use Google's products in these tiny homes. The YouTube creators include MyCupcakeAddition, filmmakers Wong Fu Productions and the musical talent of Us The Duo. Each tiny home is designed to reflect the creators' style.

The tour kicked off last week during a block party at Abbot Kinney, an outdoor shopping area in Venice, California.

It's all about the consumer experience in 2017. "We realized that the best way for people to experience the magic was to create a tiny little neighborhood where people could step inside and see how Google Home and Google Play Music would work in the lives of three very different types of people," said Gabrey Means, Grow co-founder.

In each tiny home, the hosts planted Easter eggs from the creators that connected back to the video they posted before the event.

Google recently launched a feature in Google Play Music that allows subscribers to personalize their playlists.

Assistant becomes the DJ of the curated music. For instance, when making cookies, if your hands are covered in dough and flour, "Ok Google, play music for cooking" gets the tunes started.

eMarketer released estimates Tuesday that 2017 stating that 185.5 million -- or 56.8% of the population -- in the U.S. will listen to digital audio at least once monthly, up 2.9% compared with last year.

Tami Anderson, managing director at Grow, said the San Francisco-based experiential marketing agency has been working with Google for years. "We've done a variety of activations across the 50 states," she said.

Whether or not this roadshow will stop at other locations across the country remains uncertain, Anderson said. Sometimes Google starts with two markets and then keep rolling.