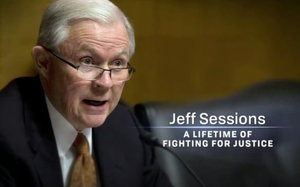 Donald Trump has pushed almost every political boundary during his campaign, transition and now presidency.

In true Trump style, the drive to confirm his cabinet picks has taken on an unconventional tone.

A 30-second TV ad titled “Champion,” in support of the confirmation of U.S. Attorney General nominee Sen. Jeff Sessions (R-AL), was aired 20 times, according to iSpot, and at least once on CNN and MSNBC in the New York market.

The spot was placed by 45Committee, a pro-Trump super PAC.

The push for Sessions’ confirmation also has its own Web site — www.confirmsessions.com — a project of the Judicial Crisis Network (JCN), a conservative group that claims it's “dedicated to strengthening liberty and justice in America.”

It is unusual for a cabinet pick to have a TV ad supporting his or her confirmation. Only U.S. Senators get to vote on the pick, so it is a bit curious why 45Committee would spend monies on an ad, rather than organize for the midterms.

One presumes, since the ad asks for viewers to call their Senator, that the ad would only be aired in states with Democratic Senators who want to delay a vote on Sessions’ confirmation. However, getting a high enough volume of calls to shift votes seems unlikely, given the Republican majority in the Senate.

Still, running a TV ad in support of a federal cabinet nominee raises concerns. It begs questions about how a Trump presidency will use advertising to influence policy or affect public sentiment.