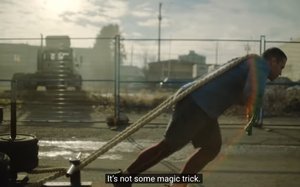 Super Bowl LI hasn't even kicked off yet, and there’s already one loser: Retailer GNC is reeling after learning that the National Football League has rejected its ad, scheduled to air in the first quarter.

The spot itself — an inspiring wellness anthem themed “Courage to Change” — isn’t the problem. The decision came about as a result of questions from USA Today’s sports coverage, wondering why — since NFL players are barred from endorsing GNC because it continues to sell banned substances in some of its supplements — it was willing to run the ad. Asking the question, apparently, was enough to trigger the NFL’s call to remove GNC from the lineup.

“While we are disappointed by Fox Sports/NFL’s late-in-the-game decision to exclude our ad from the Super Bowl, we continue to be excited about the campaign,” says Jeff Hennion, CMO of the Pittsburgh-based retailer, in a statement. “The NFL is one of many sports governing bodies, all with specific and widely varying policies. At GNC, we follow FDA regulations and our own strict standards to ensure customers know what’s in our products.”

Ads focus on unknown heroes — a drummer overcoming the loss of his arm, a yoga teacher fighting cancer, and a young woman teaching martial arts—working hard to make physical changes. “It’s not some magic trick — it’s your will,” the voiceover says. “Change is your destiny. Now go chase it.” (The ad agency is Bullish.)

The cancellation is just the latest setback for GNC, which has been trying to shed its hardcore supplements-for-bodybuilders image for some time. It's also been challenged by complaints about big price discrepancies across its stores and Web sites. Last month, it even took the unusual step of shutting its 4,400-plus U.S. stores down at once for a single day, Chipotle style, to even out pricing, transition to a new store format, and introduce its new loyalty program.

It had been counting on the Super Bowl spot to cement those changes and bring in new shoppers. "The decision to make the substantial investment in Super Bowl advertising and promotions reflects our commitment to raise awareness of the One New GNC and invite consumers back into our stores,” its interim CEO said when it announced the Super Bowl buy back in December. “Done right, a Super Bowl advertising strategy, and the subsequent campaign that follows with the investment has the power to drive significant interest in the brand, encourage trial and do it much, much more quickly than we could with a traditional advertising plan."

The chain is struggling. In its most recent quarterly results, revenues fell 8.1% to $628 million, with same-store sales dropping 8.5%.