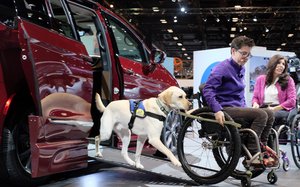 CHICAGO — Chrysler, which led the industry in supporting automotive mobility, is partnering with BraunAbility to promote “Give A Dog A Job” program, benefitting Canine Companions for Independence.

The automaker introduced a wheelchair-accessible 2017 Chrysler Pacifica at the Chicago Auto Show. Wallis Brozman, who received a service dog from Canine Companions, was on hand to demonstrate some of the tasks Mork can perform for her, including picking up her keys and pulling her up the ramp of her vehicle.

The Santa Rosa, California-based organization has six training centers across the country and is the largest nonprofit provider of assistance dogs in the United States. More than 3,000 volunteers, including 1,800 puppy foster parents, help socialize and train the dogs. About $50,000 of time and training go into each of the dogs, but the group offers them for free to clients with disabilities. There is currently a wait list of about 450 people who have applied to receive a service dog.

“Give A Dog A Job” will not only raise funds but also awareness, said Bruce Velisek, director, Chrysler Brand at FCA Fiat Chrysler Automobiles.

The partnership was announced with a video that was shown at the press conference. The automaker has created a dedicated website at driveindependence.org to promote the year-long effort. There are several more “phases” to the promotion, which will be announced later this year, Velisek tells Marketing Daily.

The Chrysler brand was the first automaker to support the automotive mobility industry and the first in the industry to help ease the financial burden of drivers with physical challenges, offering up to $1,000 cash reimbursement for expenses related to adaptive equipment; BraunAbility pioneered the mobility industry more than 45 years ago with a wheelchair lift installed on a full-size Dodge van.

The automaker sells about 1,500 vehicles a year that end up equipped with the BraunAbility equipment, Velisek tells Marketing Daily.

The company is also preparing to launch a campaign for the hybrid version of the Pacifica later this month, he adds. Idioms such as “when pigs fly” will figure into the creative and the PacifiKids introduced when the car debuted will also be included in this effort.