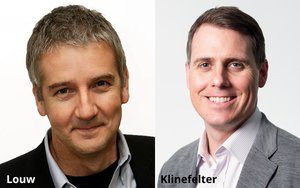 As CTO, Louw will lead the systems engineering and technology strategy for the company, including technology architecture and standards, risk management, and research and development.

In his post, Klinefelter will focus on the company’s growth strategy in new markets and growing demand-side technologies. The company said Klinefelter will work closely with China-based Spearhead Integrated Marketing Communications Group which acquired Smaato in June 2016. He will work on the Spearhead/Smaato partnership, a China-market expansion, and aiming to leverage the partnership's mobile programmatic capabilities. The partnership has made new resources and technologiy available for improved access and a better understanding of the Chinese and global markets that both companies didn't have before as individuall entities.

Louw’s experience as a technology entrepreneur has spanned the finance, advertising,media and entertainment sectors. Through his prior roles at RhythmOne, Agency.com/Designatory, World Wrestling Entertainment, and VMS, Louw has led startups of all sizes, helped navigate multiple initial public offerings, and acquisitions.

Klinefelter was promoted from his former role as vice president of corporate development. He has more than a decade of  investment experience across digital media and principal investment platforms. He joined Smaato in 2014 and played a lead role in undertaking due diligence in the company’s acquisition by Spearhead; the deal closed in December 2016.  Previously, he oversaw corporate development at RhythmOne Plc.