Notes From The Front 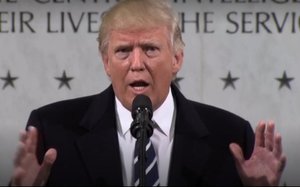 Nobody sees a coup coming. That’s why it’s called a coup. If we could see it happening, we would call it something else: an act of war. Remarkably, that is exactly how Donald Trump has increasingly characterized the White House’s relationship with the media.

“I have a running war with the media,” Trump declared to intelligence officials and press covering his first official act as president, a speech at CIA headquarters the day after he was inaugurated. It feels like the war has been escalating ever since.

Less than a week later, Chief Strategist Steve Bannon told The New York Times to quote him that the White House sees the media as the “opposition party.”

Trump has consistently referred to America’s best news organizations as “dishonest” and “fake” and on Friday singled out the Times, NBC, CBS, NBC and CNN as “the enemy of the people.”

That sparked comments from at least one member of the Republican leadership, John McCain, who sounded the alarm in appearances on Sunday morning news shows like NBC’s “Meet The Press,” noting, “That’s how dictators get started.”

Asked point blank by "Meet The Press'" Chuck Todd, McCain added: “I'm not saying that President Trump is trying to be a dictator. I'm just saying we need to learn the lessons of history.” 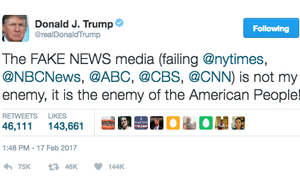 ia themselves, which cover, analyze and attempt to put the President’s efforts to delegitimize the news media into context.

What has been going on behind the scenes has been a more clandestine war to steer Americans away from the mainstream media’s coverage to the President’s own version of the facts.

Among the most clandestine -- the Trump Administration’s use of a powerful AI-enabled data-targeting platform called Cambridge Analytica -- has been covered by alternative journalism outlets such as Motherboard and Scout. Describing the platform as a “weaponized AI propaganda machine,” Scout’s piece is worth reading for industry pros merely interested in learning about state-of-the-art ways of applying Big Data to targeting, messaging and influencing how people think and feel.

As citizens, it should be alarming how an administration that has created a self-declared war on the media is utilizing non-transparent data, technology and messaging to influence people’s minds.

What is the role of advertisers and agencies in a White House war on media? I don’t know, but just as brands have taken a position on unsavory media practices that hurt society in other ways -- pirated media, malware, fake news, etc. -- I would recommend developing one that supports freedom of the press.
artificial intelligence, data management, data-targeting, media, news, politics
Next story loading