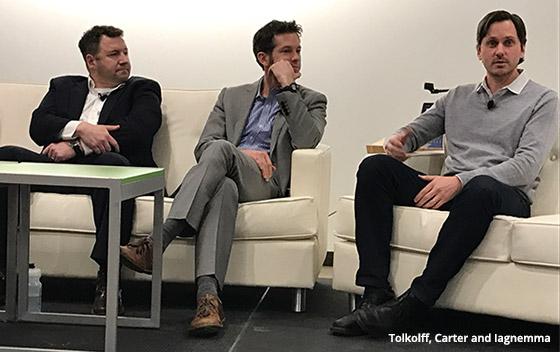 Although there appears to be general interest in autonomous vehicles, fully self-driving vehicles won’t be populating public roads anytime in the near future.

That was the general takeaway from a panel discussion at the recent Future of Transportation event in Boston, hosted by the Mass Technology Leadership Council.

The City of Boston’s Kris Carter said the city is actively exploring autonomous vehicles for public transit as part of its smart city initiative.

The three challenge areas that Boston is exploring are safety, access and commute times and reliability, according to Carter, who is the co-chair at the Mayor’s Office of New Urban Mechanics.

“We look at AV (autonomous vehicles) as being a way to address those three challenges that we’re currently facing,” Carter said. “We know it’s not going to happen today or tomorrow, but government also doesn’t move at the speed of today and tomorrow.”

“It’s really about replacing single-occupancy vehicle trips with some sort of shared mobility and AV seems to be something that we can do that with,” Carter said.

Other executives agreed that fully autonomous vehicles aren’t likely to happen in the short term.

“Notwithstanding what you read in the press, the technology is quite some time away from being mature enough to put on the road in a level 5 fashion, and there’s an open question as to whether you’ll ever get to true level 5,” said Karl Iagnemma, CEO of nuTonomy.

Level 5 is the highest level of driving automation, which requires no action from a driver in any scenario.

Here are the different levels of autonomous vehicles from the Federal Automated Vehicles Policy:

The Department of Transportation defines the driver as the responsible party when operating between levels 0 through 2, but levels 3 through 5 define the automated system in the vehicle as being responsible for monitoring the driving environment.

Toyota is currently developing driving systems at both ends of the automation spectrum, named Guardian and Chauffier, according to Jane Lappin, director of government affairs and public policy at Toyota Research Institute.

At the low end, Guardian is a system that will drive in parallel with a driver, monitoring the environment around the vehicle and the driver’s actions, and intervene when it determines that the vehicle may crash or run off the road, according to Lappin.

"That way, there’s no challenge around determining whether you’re alert or engaged. You’re always driving, the vehicle is always watching,” Lappin said.

Chauffier is a vehicle operating at the higher levels of automation that Toyota plans to bring to market in a ride-sharing capacity first. The idea is to bring access to automated mobility by reducing cost barriers to a per-ride basis instead of the cost of the vehicle, according to Lappin.

Rather than widespread individual adoption of autonomous vehicles, nuTonomy’s Iagnemma said the future use cases will align more with the functionality of public transit systems.

“I think there’s a bit of a fallacy in the space, that’s somewhat driven by the popular press, that one day we’ll wake up and we’ll look out the window and there will be autonomous cars on the road everywhere, and that’s just not the way the technology’s going to evolve,” Iagnemma said.

“What’s more likely is we’ll find application domains where the traffic density, the infrastructure condition, the conditions are right, that we’ll see a deployment that makes sense and fits the state of the technology and it’s going to shuttle you back and forth between a couple of very useful points that you want to get to, but it’s not going to take you door-to-door back to your home,” Iagnemma said.