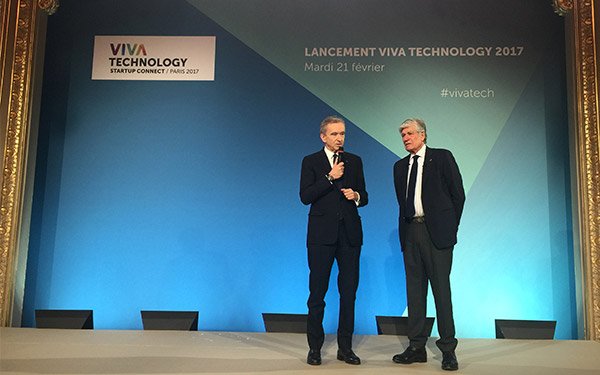 Publicis Groupe is staging its second annual Viva Technology conference this June. The Paris-based ad giant says it’s designed to "solidify France's role in the world of innovation and start-ups as well as facilitate collaborations between larger businesses and emerging start-ups."

The goal is to welcome more than 50,000 visitors including 5,000 startups during the three-day event held June 15, 16, and 17 in Paris, at the Porte de Versailles.  The confab’s inaugural year (2016) was a tremendous success, says Publicis Groupe CEO Maurice Lévy. "We are keeping what worked, fixing what didn't and creating new aspects," he says.

"What has worked is clearly content," says Lévy. There will be an expanded lineup of speakers, including Peter Fenton, General Partner, Benchmark, Tony Hseih, CEO, Zappos and Jeffrey R. Immelt, Chairman & CEO, GE. This year will also place a heightened focus on women's issues with additional female speakers and sessions addressing their concerns.

Viva Tech will host the "Talent Connect" platform that includes a “speed-dating” job proposal opportunity where people can be interviewed and meet recruiters. "Mentor Connect" is inviting CEOs, VCs and "grey-haired people" to offer help and coaching to startups. And “Office Hours” will match startups with potential investors and VCs.

Since Publicis is now 91 years old, it isn't hosting an anniversary competition to fund 90 projects like last year. Instead, this year it will award one big prize-- the LVMH Innovation Award--to the most innovative startup in the luxury field.

The competition will invite hundreds of startups to compete in the initial rounds. They’ll be whittled down to 32 contenders and then a winner.

There will be "something fun" for the last day when the exhibition opens up to the public, including work from the Maker community, digital art, e-gaming, and a concert.

Lévy will be stepping down as CEO of the company on June 1, when he will assume the chair of the Groupe’s Supervisory Board, which will keep him very active in the company’s affairs including the Viva Technology event.

And he has high hopes for this event noting that more than 40,000 people attended last year. "This is not a France event, but a global event that takes place in France," Lévy said, adding that he would like it to become an annual event similar to what the Cannes Film Festival is for movies.