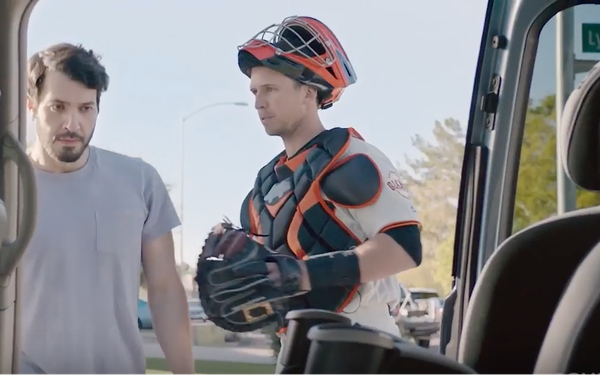 The campaign includes a new commercial, “Buster’s in Control,” that shows Posey in full uniform deciding to change his environment to a beach instead of the baseball diamond, as a nod to how Esurance allows customers to be in control of what coverage is right for them.

“Our partnership continues to be a great driver of success in generating large-scale awareness and reach for our brand as well as an increase in consideration and likelihood to quote,” Kristen Gambetta, brand sponsorship manager at Esurance tells Marketing Daily.

In addition to the TV commercials, Posey will star in a series of social videos titled “Pep Talks with Buster,” on Esurance’s social media channels throughout the season. The videos will feature Posey giving pep talks to people having self-doubt in everyday situations, like changing a tire for the first time or installing a car seat.

For the last two years Esurance has worked with MLB to give more fans greater access through programs like the all-digital Esurance MLB All-Star Game Ballot and Esurance MLB Awards.

“This year, we’ll continue to apply an efficient and smart approach to our MLB partnership and our entire sponsorship portfolio,” Gambetta says. “That includes leveraging key learnings from our internal research, which indicates that baseball fans responded positively to our Buster Posey content, so we’re creating more programs around him this season that will drive even more fan engagement.”

Esurance will continue as the title sponsor of the all-digital Esurance MLB All-Star Game Ballot and the Esurance MLB Awards. The company will announce specific activations associated with the programs later in the season.