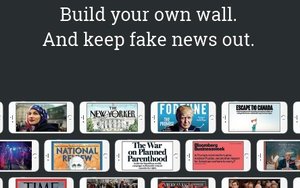 In a world full of fake news, delivering the truth is a priority.

Texture, a content distribution app that provides access to more than 200 North American magazines, is launching a new campaign showing off its commitment to quality journalism.

“Magazines have been one of the stewards of journalism,” Jim Bobowski, Texture’s chief marketing officer, tells Publishers Daily. “Given a lot of the current conversation about the importance of media, we thought it was a good time to show off our offerings.”

The new campaign, titled “Wall of Truth,” shows off the breadth of publications available through the app, ranging from National Review to Mother Jones, using the headline, “Build your own wall. And keep fake news out.”

The ad purposefully stays away from suggesting which publications to reach, instead noting that quality journalism is important, Bobowski says.

“We’re not trying to take a point of view, but we do want to reflect the conversation,” he says. “We feel like we should be part of the conversation. Our goal is to encourage readers to embrace the consistently high-quality journalism that magazines produce day in and day out.”

The effort -- which will run in national publications such as TheNew York Times and magazines and will be supported by digital, social and event marketing elements -- builds on a campaign Texture launched late last year (with the tagline “Something Amazing”) highlighting the entertainment value of magazines, Bobowski says.