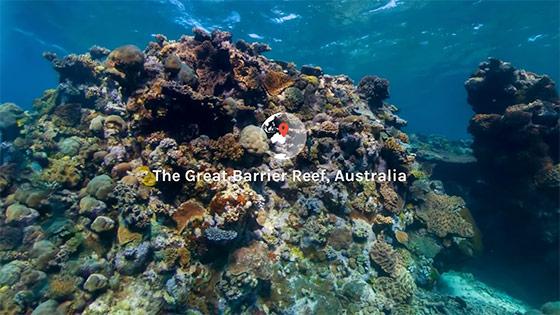 Web-based virtual reality can now be experienced on almost any smartphone, thanks to a new update to Google Chrome.

At the time, the desktop version of Chrome brought universal support for Web-based VR to desktop, which enables users to view and interact with 360-degree content directly in a Web browser.

However, that update was limited to Google’s Daydream VR ecosystem for mobile-based VR headsets.

The latest version of Chrome on mobile now supports Google’s Cardboard viewer. This expands the list of supported devices to essentially any smartphone, since Cardboard does not have minimum system requirements.

In addition to expanding to Cardboard, Google created a platform for anyone experimenting with WebVR to submit projects and test other experiences.

One of the new experiments, which was created within Google’s Creative Lab, combines Google’s Speech and Maps Tile APIs to enable voice-controlled navigation to locations around the world.

The Speak to Go experiment listens for voice commands when the user presses the button on a Cardboard viewer. The user can be transported to a 360-degree photosphere of ‘almost anywhere in the world’ by saying the location, according to Google.

“Voice is especially helpful as a method for freeform interactions, like we saw in Speak to Go, where a user can say any place in the world,” Michael DiGiovanni, mobile architect at Isobar, told the IoT Daily.

“Your alternatives are horribly long lists or having to type on a keyboard, which is a pretty terrible experience in VR,” he said.

Using voice interaction is most beneficial with Cardboard-based experiences because the viewer is limited to a single button for input, according to DiGiovanni. As a result, the user interface is generally built around a user gazing at an object and pressing the button to select that object

“When you add voice into the mix, you wind up opening a ton of interactions that would otherwise be impossible or needlessly convoluted,” DiGiovanni told the Daily.

However, conveying those new interaction capabilities to a user could be a challenge when designing experiences.

“For something like Speak to Go, it’s easy to understand that being able to speak a location’s name will teleport you there,” DiGiovanni said. “For something more complex like a game, UX designers need to figure out a way to surface those commands without breaking the immersion of the VR experience.”

Another WebVR experiment from Google’s Creative Lab enables multiple users to engage with sound-making objects together in VR. Different VR headsets and controllers enable varying levels of interaction with the objects, but users can engage in the same experience with different hardware. Showcasing ‘cross-device co-presence in VR’ was the goal of that experiment, according to Google.

Other VR systems, such as HTC’s Vive and Oculus’ Rift, are not currently supported by Chrome, but can be used with other experimental browsers, such as Chromium. Google plans to support those systems in the future.