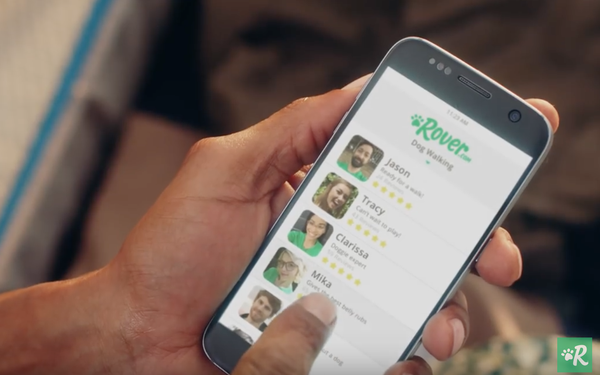 The $4.5 million effort was created by Pereira & O’Dell for the rapidly growing company, which has plans towards an IPO in 2018.

The campaign will run through August 2018 on national cable and network TV, in select OOH markets, and across social and digital, including Rover’s YouTube channel.

Creative, which declares the brand as “The Dog People,” features five dogs, including  Brigitte, the French Bulldog who stars as Stella on “Modern Family.”

The campaign aims to show pet parents that Rover can help them find true dog people who will care for their dog the same way they would, said Halle Hutchison, vice president of marketing for Rover. The objective is to increase brand awareness and consideration among pet parents

Research indicates that most dog owners don’t like the idea of sending their dog to a kennel or having to call in favors from friends and family to dog sit. A survey of pet parents conducted by Rover found that 43% said they had opted not to travel for the holidays because they didn’t want to leave their dog at a kennel.

With Rover, pet parents can find and book trusted, highly-rated dog people in their own neighborhoods, who are backed by the security of a nationwide company.

Rover has established itself as the largest network of dog sitters in the U.S. with more than 100,000 sitters and more joining daily. And over the past year it has become what it says is the largest dog walking service in the country with more than 75,000 active dog walkers covering thousands of cities. The company recently acquired DogVacay, which will allow Rover to bring new products to market faster and invest even more aggressively in building the best tools for sitters and walkers.