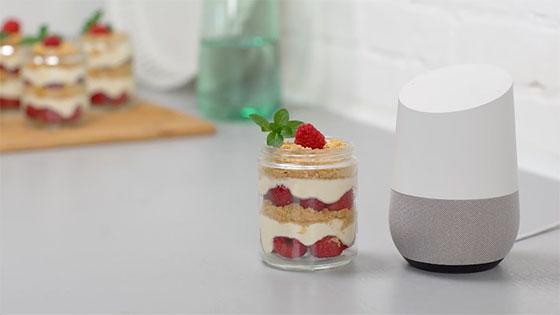 Smart home voice assistants are getting easier to lean on.

Amazon’s Alexa has more than 10,000 ‘skills,’ essentially apps a person connects to by speaking to Alexa, such as through Amazon’s Echo.

Of course, in many cases the consumer has to recall the actual name or function of the skill to execute it, as in ‘Alexa, open NASA Mars’ or ‘Alexa, open Flight Deals.’ The device essentially shortcuts finding and opening a mobile app.

Amazon’s newest version of Echo, called Echo Look, adds a camera so owners can tell Alexa to take their photo so they can check out their outfit, as I wrote about here yesterday (Amazon’s Echo Look Can See You, Take Hands-Free Style photos).

Alexa can do many more things, like controlling smart lights, appliances, security systems and playing music.

For at least one person in our household, the idea of actually walking over to Starbucks, waiting in line and ordering a coffee seems like a distant memory. Now, it’s just ‘Alexa, order me a coffee from Starbucks.’ That’s it. Order history is tracked by the Starbucks app, that info is accessed via Alexa and, after confirmation, the order is placed, with Alexa saying when it will be ready.

From there, it’s a step-by-step approach, as in “OK, Google, start recipe,’ ‘OK, Google, next step’ and so on.

There are other assists outside the home as well, such as “Ok, Google, call an Uber.’ Rather than providing a window to apps, Google Home opens a window to the world of Google knowledge.

Smart home assistants are still at their early stages, but rapidly evolving.

Although most (76%) consumers have used voice commands on devices such as smartphones or TV sets, only 11% of U.S. consumers own either an Amazon or Google voice assistants, with Amazon dominating the market so far, according to GfK research.

There also was a time that only 11% of consumers owned a smartphone.