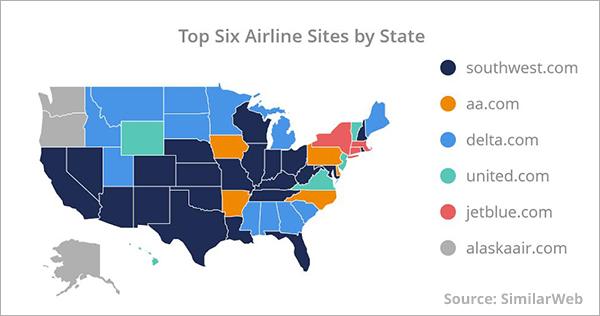 This means consumers will be looking for the perfect outfits to lounge on the perfect beach at the perfect Hilton, Marriott or Airbnb. And they will look for the best airline to get them there.

Since March 2016, there has been considerable investment in paid-search traffic to delta.com, according to SimilarWeb. The report, SimilarWeb Travel Trends & Insights 2017, analyzes the travel industry's search, mobile and Web traffic trends, across airlines, hotels and accommodations, OTAs, car rental, theme parks and cruises.

The airline also has the longest average time on site generated by paid-search traffic of the top five airlines, but Jetblue has the highest conversion rate at 12.9% as of March 2017, with total traffic of 39.2 million in the first quarter of 2017.

Direct traffic to Southwest, American Airlines and Delta had the greatest impact between April of 2016 and March of 2017. Organic search followed at No. 2, and referral traffic at No. 3.

When it comes to accommodations, Airbnb dominates as the top hotel option in all but four states, with Booking.com conversion rate jumping to 148.5% higher than airbnb.com. Total traffic to Airbnb in the first quarter of 2017 was 106.9 million, booking.com followed with 92.5 million and hotels.com at 72.6 million.

Similar to the airlines, most traffic comes from direct traffic to Airbnb.com, Booking.com and Hotels. Overall, organic search followed at No. 2, and referral traffic at No. 3. Paid search did much better at driving traffic for accommodation sites compared with airlines.

During the past year, online travel agencies saw further consolidation with the Priceline Group acquiring metasearch engines cheapights.com and momondo.com to go with its earlier acquisition of kayak.com. In contrast Expedia has not made any further moves since acquiring travelocity.com, orbitz.com and homeaway.com all in 2015.

TripAdvisor has the most total traffic to the site in the first quarter of 2017, with 254.3%. Expedia.com followed with 148.1 million and Kayak with 83.4 million, although all three sites saw a decline in the past year.

Interestingly, the OTAs also have the best results from direct traffic sources, but TripAdvisor gets the majority of traffic to the site from organic search and much less from referrals compared with the other two sites. Although TripAdvisor is the No. 1 site in this category, Expedia at No. 2 has a higher conversion rate.

Of the 10 car rental sites, all but one saw their traffic dip when comparing the first quarter in 2017 with the year-ago quarter. Just as interesting, cruise sites receive a higher proportion of traffic from email campaigns than all the other Travel categories.