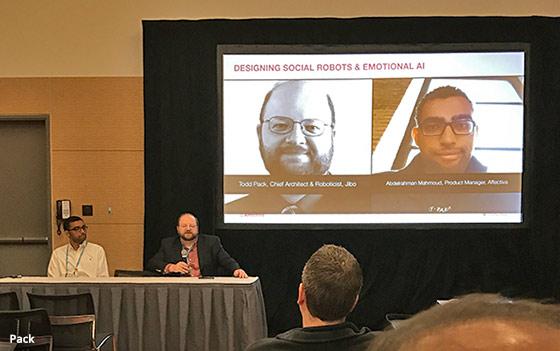 There are two approaches in how consumers start their interactions with voice assistants, different kinds of drones are now flying and city trash containers are being outfitted with beacons for consumer tracking.

These were just a few of the many tidbits of connected info this week that came out of the first day of the annual LiveWorx 17 conference that IoT powerhouse PTC hosts every year at the Boston Convention and Exhibition Center.

In addition to keynote addresses, the 5,000+ attendees could attend any of the more than 230 separate presentation sessions scattered throughout the massive convention center complex.

Helen Greiner, founder and CTO of CyPhy Works, showed videos of a drone that can fly to 400 feet but remains tethered by wire to a ground controller. This allows the drone to stay up for an unlimited amount of time, unlike typical battery-operated devices that have to return after relatively short trips for charging.

The tethered drone was used to monitor the Boston Marathon from above this year.

“They would be hidden in plain sight,” said Dillon.

To start an interaction with a digital assistant, a hot word is needed. Siri requires a ‘Hey, Siri’ to start listing, for example.

However, the catch is the amount of time left by the consumer between saying the hot word and asking the question or giving a command, time lags that have to be built into the initial design.

Pack said in the course of researching the time lag, the company found an interesting phenomenon.

The technology essentially can handle either. Maybe people, not so much.