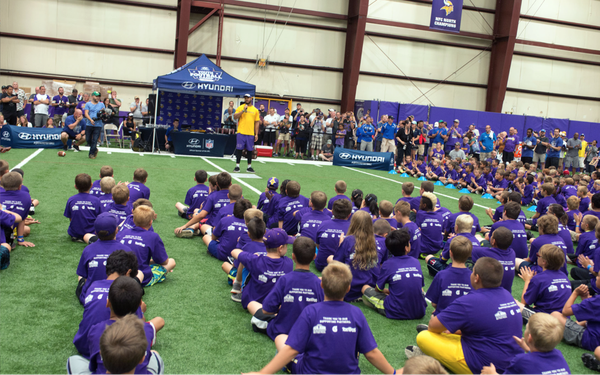 Hyundai Motor America, an official NFL sponsor, is giving young fans across the country the chance to take the field with their favorite NFL teams and players.

The Hyundai Youth Football Camp program will hit the road for a second consecutive year this summer, with stops in two new markets including Miami, Dallas, Phoenix, Los Angeles, Minneapolis, Pittsburgh, and the New York City area. Parents are encouraged to watch their children participate in the camp while also having the opportunity to check out the latest Hyundai vehicles.

“We also added a Hyundai ride and drive in two of the markets so parents could test drive our vehicles,” Stewart tells Marketing Daily. “We are also giving out a $75 NFL Shop gift card for completing a test drive at a Hyundai dealership.”

An NFL player will join Hyundai in each city to lead a group of 7- to 13-year-old camp attendees through a series of fundamental football skills and drills. Each camp will have a morning and afternoon session where local coaches will support the NFL players in facilitating safe, youth-focused conditioning activities. A microsite dedicated to the outreach effort.

The automaker is entering its third season as an official NFL sponsor and is the official car and SUV of the league. It also has relationships with six teams, including the Arizona Cardinals, Houston Texans, Los Angeles Rams, Miami Dolphins, Minnesota Vikings and Pittsburgh Steelers. Hyundai’s Youth Football Camp program is managed by Advantage.

At each camp, Hyundai’s nonprofit organization, Hyundai Hope On Wheels, will invite local childhood cancer survivors, reinforcing Hyundai’s continued effort in the fight against pediatric cancer. This year, Hyundai Hope On Wheels will donate more than $15 million to children’s hospitals across the U.S. to continue its commitment to funding research in pursuit of cures for pediatric cancer.

“We will have a Hope On Wheels Vehicle display, a grant check to a local hospital showcased onsite, signage describing the program in more detail, and have invited more Hope On Wheels kids to participate in the camp,” Stewart says.