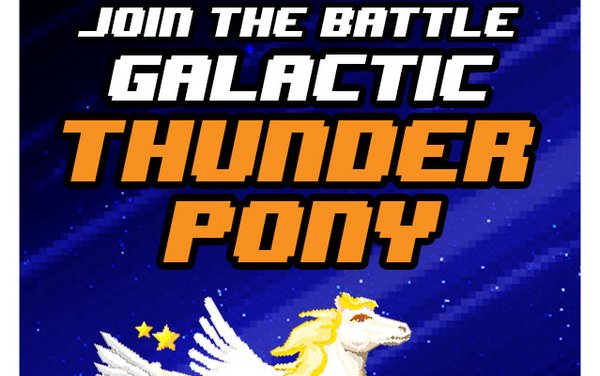 The battle for wireless customers is heading into the fantastical intergalactic realm.

Via a new mobile interactive game, Galactic Thunder Pony, Boost Mobile encourages consumers to defeat the “evil mobile mega corps” and free intergalactic customers from their “devious contracts, throttled data and life-sucking fees.” A throwback to the 8-bit era, the game is much like “Space Invaders” or “Galaga,” involving shooting spaceships and other obstacles, defeating enemies to “bring mobile freedom back to the universe,” according to the game’s intro.

“Gaming and more specifically E-Sports is a huge opportunity for many brands to insert themselves,” Nick Holt, creative director at Boost Mobile, tells Marketing Daily. “With smartphones becoming consumers main source of entertainment and connectivity it only seemed fitting to have a Mobile game to help tell our brand story.”

The 8-bit aesthetic is a way for Boost to keep the game entertaining while keeping things simple for fast loading and game play, Holt says. “We feel the engagement and tinker time will be extremely solid due to the game's retro aesthetic, [and its] simple and irreverent approach,” he says. “It's time to defeat the Evil Mobile Mega Corps and make the mobile galaxy a better place.”

The game is available on laptops and mobile devices throughout the country via a website but will experience a push in New York and Philadelphia via an out-of-home campaign which will involve SnapCodes for consumers to use for direct access to the game.

“What better way to pass time on the train than fighting the battle against [game characters] 'Mawro the Data Crusher,' 'The Dead Zone Dementor,' and the 'Parasitic Planzer,'” Holt says.

The game is an extension of Boost’s “Project Switch” campaign, which shows consumers how easy it is to switch mobile carriers.

After the push in the two initial markets, the company will undertake additional digital advertising, geo-fencing campaigns and SnapChat ads beginning next month.