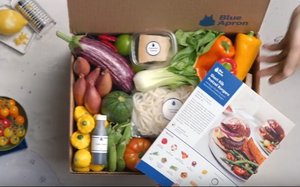 Meal kits—the edible subscription boxes that pundits say may eventually eat into grocery-store market share—are under the microscope as never before. That’s because Blue Apron, struggling to win investors over to its initial stock offering, surprised observers by lowering the price range of its shares. (It now expects shares to be priced at between $10 and $11 rather than the $15 to $17 range it initially targeted.)

Marketing Daily asked Brendan Witcher, an analyst who follows e-business and channels for Forrester (and is also a Le Cordon Bleu-trained chef) why this category is so challenging, and why an estimated 60% of users quickly drop their subscription.

A. The concept of food delivery is based on finding more convenience and ease. And while these subscription boxes tout the idea of being easier, the reality is they create structure. Many people like to compare meal kits to something like Dollar Shave Club, but there’s no comparison. I can get my razors and throw them in a drawer where they will last forever. With food, you use it or lose it. And if that happens to you a few times, you’ll stop subscribing.

Q. Besides the reality that the food will eventually spoil, what else causes churn?

A. Subscription services are based on novelty and the willingness to try new digitally enabled things. That’s hyper-adaptability—we’re happy to move from taxis to Uber or from Blockbuster to Netflix. But the minute they don’t work or add value? We leave. That’s hyper-abandonment. And once people leave, they are not coming back.

Q. Which companies are successful in surviving that churn?

A. This isn’t a new concept—Harry & David had the Fruit of the Month Club 80 years ago. But success requires moving someone from the subscription, which is a way to generate trial, to regular commerce. These meal kit start-ups don’t have that.

Q. Many have speculated that this is a natural area for the combined Amazon/Whole Foods Market, already dabbling, to dominate. Do you agree?

A. No. People confuse the concept of grocery with prepared food, and while many grocers have gone into prepared food in a very basic way, they are not the same thing. Food preparation is more regulated. There are different safety issues. There are cooks and prep people. Grocery stores are not set up for that. Amazon’s core competency is in delivering commoditized things. Online grocery services, like Fresh Direct, work because most people order the same things week after week.

Q. And meal boxes are meant to spice people’s lives up, right, offering them food and recipes they haven’t tried?

A. I wouldn’t say that. But I would say the long-term model has yet to be established.