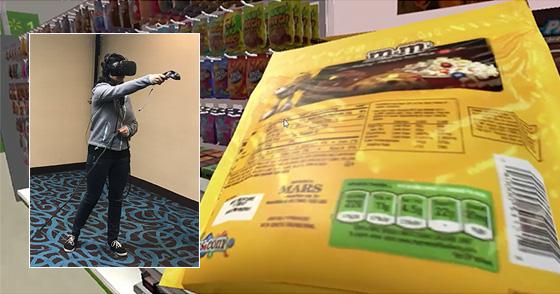 A virtual supermarket was created for a major brand to measure the impact of various in-store marketing approaches.

The pilot program was created by System1 Research for Hershey’s chocolate to better understand how in-store signage and kiosks would impact consumer behavior relating to Hershey products.

To go over what was learned, I caught up with Gabriel Aleixo, managing director, behavioral economics at System1 Research, part of System1 Group, the behavioral science and marketing company formerly known as Brainjuicer.

Several separate aisles were created in the virtual store and consumers in a hotel room went virtual shopping, one at a time, over the course of a week.

“We wanted to validate VR as a tool to replicate the in-store experience,” Aleixo said.

Wearing VR headsets, the shoppers roamed the aisles as System1 tracked items selected and placed in a virtual shopping cart.

In the display with no merchandising used, basically the control group, 14% of shoppers selected a Hershey’s product first.

In a second display, large boards behind the display with the Hershey’s brand name and logo were added. The explicit Hershey’s name and logo boards actually had a negative impact on purchasing of Hershey’s products, with only 10% of shoppers making those selections.

The brand name and logo also had a negative effect on time, with the average time taken to choose any Hershey’s product at 38 seconds. For both the control and still image advertising locations, the time to select a Hershey’s product was only 27 seconds.

The third display included still images reinforcing the emotion of the brand.

“Consumers want a fluid experience and don’t want to stop,” Aleixo said. “Most decisions on a shopping trip are driven by gut and intuition. People don’t want to overthink those things.”

In the third display with the still images, Hershey products were selected first by 19% of shoppers.

Three general learnings came out of the VR shopping pilot, according to Aleixo:

“We wanted to validate the use of VR as a tool,” Aleixo said. “We believe this is the next step for shopper marketing.”

Virtual reality is expanding into the world of retail.