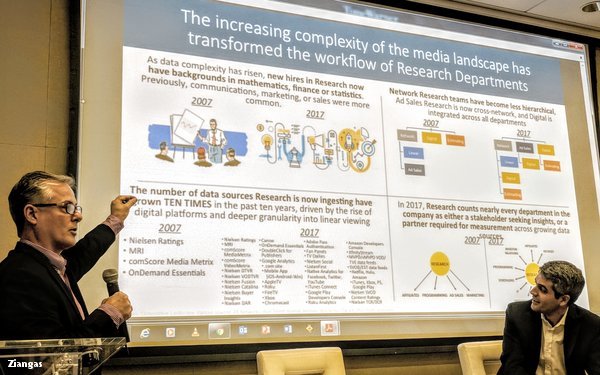 Add AMC Networks to the list of media suppliers championing time as the new metric for audience exposure.

The big issues for many participants involve reconciling the multitude of metrics, systems and ways of processing data that exist within and across each medium.

The solution at AMC Networks, Ziangas shared, was to use the most common denominator of audience exposure. “Time is the consistent measurement you can apply across all these platforms,” he said, alluding to “solutions” being developed by the network group’s research department.

By moving to a time-based consumer exposure, AMC Networks appears to be joining a growing cadre of big media suppliers -- most notably Fox Networks -- shifting toward a temporal form of advertising exposure.

While the ad industry has historically described television as a time-based advertising buy, in reality is it has been largely an impressions-based marketplace with GRPs, or “gross rating points” tied to Nielsen’s survey-based measurement of panelists' exposure to TV programming and advertising, not actual time-based exposure to the medium -- much less the ads that run on it.

Much of the meeting focused on differing legacy nomenclature and ways of thinking about TV vs. digital, as television’s supply chain crosses platforms and strives to blend the best of TV’s media-buying simplicity with digital’s audience exposure tracking.

“The mechanics of combining digital and TV will remain a challenge for some time,” acknowledged Justin Evans, vice president-data strategy at Comcast Spotlight, the local media sales organization within the giant TV and broadband company.

Evans described it as a shift from a “mindset of viewing TV” to one that is an “audience-based medium.” He said the problem is magnified even further when brought down to a local sales marketplace that has relied on less-than-desirable survey-based ratings measurement but still lacks the tools to leverage digital audience exposure in local media sales.

“We’re kind of taking a myth-busting approach when going to clients,” Evans said, adding that much of Spotlight’s pitch focuses more broadly on the actual value of local TV audience exposure vs. Madison Avenue’s current emphasis on big networks and live events like news and live sports.

“Well, we see 80% of the viewing going on outside of live news and sports,” he pointed out.