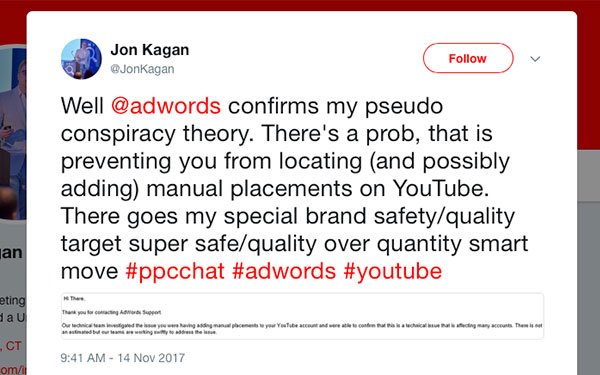 Brand safety remains top of mind for marketers and their agency partners since the spring, when Verizon and P&G pulled their advertising on YouTube in Europe because the ads served next to questionable content.

Shortly after, brands began moving from "bulk" targeting to specific targeting. Then Google created a tool on the YouTube platform allowing advertisers to quickly find individual channels and videos based on impressions and views. But the tool broke and there is no estimated time it will be back up and running, according to Jonathan Kagan, senior director of search and biddable media at MARC USA Results: Digital.

For Kagan the tool continues to become critical because the brands he supports want to only target specific videos and channels on YouTube for brand safety uses.

He said Google confirmed that the tool is broken, without providing an estimated time to have it fixed.

There is a problem preventing advertisers from locating, and possibly adding, manual placements on YouTube. "There goes my special brand safety/quality target super safe/quality over quantity smart," he wrote in a Twitter tweet.

Without the tool, Kagan needs to search YouTube for the channel, copy the URL and cut and paste into the platform. It went from a five-minute job with the tool to more than 3.5 hours.

Threatening to take his budget to Ask.com, Kagan writes: "Hey @adwords it still isn't working, and your support line team has no idea why. Care to comment or provide insight? #IAmGoingtoGiveMyBudgetToAsk.com at this rate."

Kagan said the support team reached out to him on Twitter, but never followed up.

A Google spokesperson said the company turned off AdWords keywords suggestions in September.  Kagan said it rendered the tool unusable and reversed the help it had provided for a brief time.

YouTube's tool also provides volume of impressions. Without the tool, it's a guessing game, Kagan says. Targeting has been reduced to estimating the videos the audience to target based on the video by viewing it, determining the upload date, number of views, and popularity.

Not all brands are concerned. "This goes back to the debate about who's controlling the YouTube targeting," Kagan said. "Sometimes using this method you'll use a massive amount of volume. We moved to this because of the brand safety issue."

There are other tools that will eliminate channels with right-wing politics, but it doesn't filter out the content that's not "profit labeled," he said.