The Symbiosis Of Social And Programmatic

You don’t have to be an egghead to know the answer is a symbiotic one: The rapid expansion of piecemeal unstructured media impressions generated by the explosion of social media channels has created a void that couldn’t possibly be processed manually and could only be fulfilled programmatically.

Conversely, the ability to tame social media by using technology and -- perhaps more importantly data -- to target consumers more effectively through social media channels, has contributed appreciably to the expansion of programmatic media-buying.

It’s no surprise that Facebook, Instagram, Twitter, Pinterest, Snap and others have taken a page out of Google’s self-serve targeting and media-buying automation. They enable legions of advertisers and media buyers to easily adapt their platforms into their audience reach models and internal planning and buying system.

We may never get an accurate accounting of how much has been impacting the long-tail of smaller brands, but we have a pretty good snapshot of how it is impacting the biggies, thanks to the recent release of the Association of National Advertisers’ Programmatic Media Buying report.

The report found that “social display” is now the fifth-most-prevalent platform for programmatic media-buying (cited by 45% of the ANA members participating in the survey), while “social video” now ranks sixth (35% citing).

Taming the torrent of social-media opportunity is only part of the story.

Perhaps the bigger effect has been the availability of behavioral data generated by social-media users that can be used to improve the targeting of audiences programmatically.

Social data now ranks as the third-most-prevalent source of so-called “first-party” data used by brands to target consumers programmatically, just after their own in-house CRM data and website publisher’s cookies.

When it comes to the application of so-called “second-party” data -- data generated by walled gardens that brands can use to target consumers -- social media data ranks No. 1. 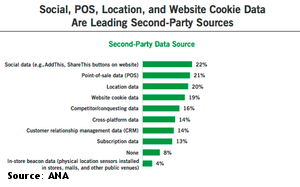