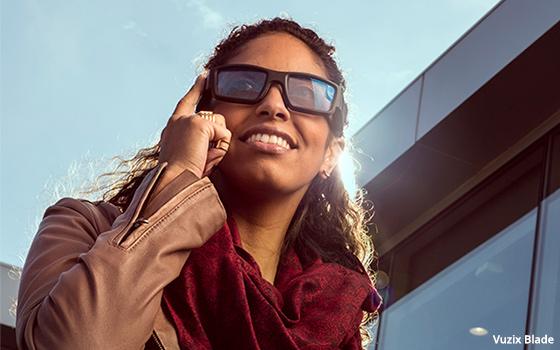 With digital assistants like Amazon Echo and Google Home coming into millions of homes, voice is becoming a common method of interaction.

The obvious question is what the role of screens will be as voice becomes ever more dominant.

The issue came up in the course of a wide-ranging conversation I had with Chris Neff, senior director of innovation at The Community, a global creative agency headquartered in Miami, around the future IoT technologies coming to market.

“I’m in the camp right now that screens will eventually be gone,” said Neff. “I think it’s an inevitability. I know I’m not the first one to say that, but from the evidence I have, to what you can experience in thinking about the evolution of where AR will go, along with some of what Intel is working on in terms of processing, I think screens are going to be gone.”

At Mobile World Commerce this week, the $1,300 Vuzix Blade smart AR glasses were shown. The glasses, scheduled to go on sale later this year, use a tiny projector that can show an image in the top corner of the lenses.

“If I can get everything I need out of glasses, and eventually smart lenses too…think about the evolution of the glasses,” said Neff. “They’re just going to continue to get smaller. The power now of the connectivity of a watch -- if I can put that information in somebody’s eyes through a lens or through glasses, in terms of on the go, I won’t need a phone.”

I agree with Neff that the transition to homes without screens is a bit further out, especially since many families or friends watch TV together.

“There are presentation screens, TV screens, and I think it’s the shared viewing experience where the screen will last the longest,” said Neff. “If I’m watching TV, I could totally watch TV on one of these smart lenses or whatever. I can essentially put the TV on the wall and I can watch it. But when it’s a shared viewing experience, we all need to watch it, we need to coordinate it. That a bit tricky, where it’s kind of shared computing. It’s a shared, kind of wireless experience. That’s probably going to happen, but it’s going to take longer."

“In 10 years, we’re probably going to be looking at maybe 50% less, or 40% less screens than we are now and eventually, why not, if technology allows it? I don’t need a screen, I’ll just wear the tech,” said Neff.

Alexa and Google Assistant likely would be just fine with that, as if they didn’t see it coming already.