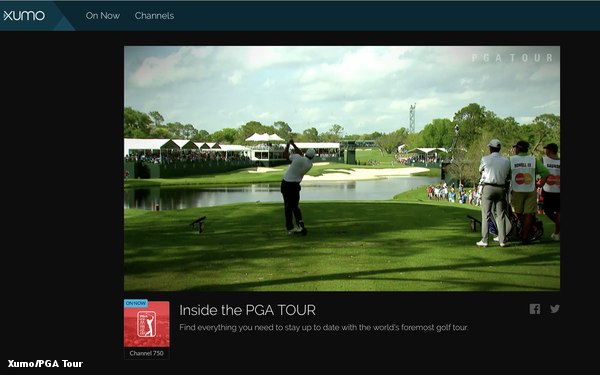 The PGA Tour will launch its first ad-supported streaming over-the-top video channel on smart TV devices as part of a partnership with streaming TV company Xumo.

The channel, which went live on Xumo over the weekend, will include live coverage of matches, as well as highlights, recaps, interviews and tournament previews.

“It is complementary to the first tournament schedule that you get through the Golf Channel and others, but it is a special new program through OTT,” Xumo CEO Colin Petrie-Norris tells Digital News Daily. “It is the first OTT deal that will include all the VOD-based content for the tour.”

Xumo takes live and library content and turns into linear, 24-hour video feeds. The company now has more than 150 channels featuring entertainment, news and sports content. The channels are primarily distributed through smart TV sets from companies like LG, Sharp and Panasonic.

Petrie-Norris says the companies are “partnering together” on advertising sales for the channel, and that the PGA will “be leaning into this heavily themselves” to promote it to the tour’s advertisers and fans.

“This OTT/CTV cord-cutter audience is extremely valuable, so for them to be able to offer that as part of their sales offering is compelling,” he says.

The deal also marks another significant step by a major sport to move into OTT. With Major League Baseball signing a deal with Facebook this month for 25 games, and with the NFL and Major League Soccer eyeing new digital streaming deals, it seems every sports league is testing how far it can go without disrupting existing businesses.

In the case of the PGA Tour, this channel won’t interfere with existing broadcast rights, but will, as Petrie-Norris says, be “complementary” to that programming.

“The PGA Tour is such a well-known brand, such a household name, with such a passionate, loyal audience, and we are extremely flattered that they saw the value in a partnership with us, and we think it is an exciting sign that the OTT streaming platforms are gaining some traction in the world of live sports,” he says.