Subaru Focuses On Longevity With 'Never Too Early' Brand Spot 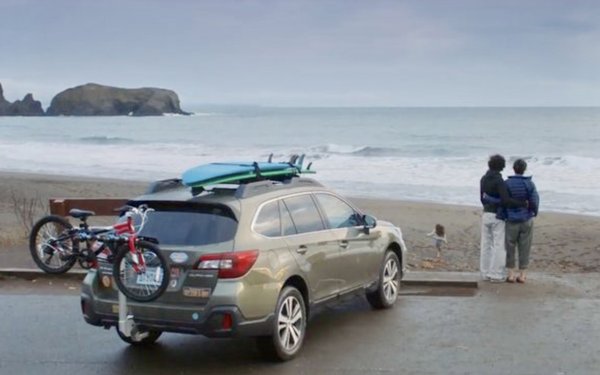 Subaru of America is showcasing the all-new 2018 Subaru Outback with a poignant spot that focuses on the longevity of the automaker’s vehicles.

The spot, from Carmichael Lynch, features a young couple at the beach eager to share all the wonders of the world with their soon-to-be-born daughter. Since  they’ve chosen to drive the long-lasting Subaru Outback, their car is still going strong even when the whole family returns to their original beach more than a decade later.

“There’s so much we want to show her. We needed a car that would last long enough to see it all,” the mother says in the voiceover.

“Never Too Early” will run in 30-second and 60-second formats. It features "Beneath The Leaves" performed by Julie Doiron, a Canadian indie rock singer-songwriter.

Notably, the spot takes a more serious tone than the Subaru spots featuring the dog family, The Barkleys.

“Subaru owners love their pets, and as such, we use them in our commercials when they can be a natural part of the story,” Brian Cavallucci, national advertising manager at Subaru of America, tells Marketing Daily. “In this particular case, the story is more about a couple experiencing the world with their daughter in an Outback that will be there for them along the journey.”

The brand is strongly associated with the LGBTQ community, but this spot notably features a heterosexual couple.

“Subaru has always been a brand that is inclusive, so we try to show different types of people and family units to reflect our owner base,” Cavallucci says.

The spot is scheduled to run through April 29 on ABC, CBS, CW, Fox, NBC, AMC and USA. It will also run as part of Subaru’s Premium Digital Video buy across Hulu, Roku, YuMe and YouTube. The spot will be adapted to the Spanish language for use in select markets.

The automaker last week debuted the all-new 2019 Forester at the New York International Auto Show. The fifth generation of the SUV introduces the roomiest and most versatile Forester ever made and also features new safety technology.

On Monday, Subaru announced a program to help divert hard-to-recycle waste from landfills and incinerators through the automaker’s environmentally focused philanthropic platform, Subaru Loves the Earth.

With less than a quarter of the 230 million tons of trash generated annually in U.S. getting recycled, Subaru and TerraCycle are teaming up to intercept and repurpose hard-to-recycle items like coffee pods, snack wrappers and disposable coffee cups and lids.