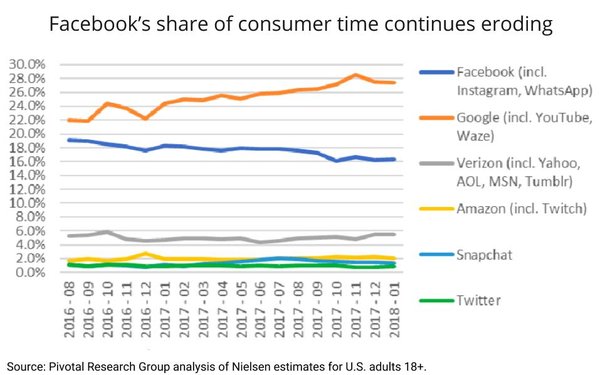 People are spending more time on Google properties these days, widening the wedge between the search engine and one of its closest competitors -- Facebook.

Brian Wieser, senior research analyst for advertising at Pivotal Research Group, points to a widening gap in the consumption rate for people using Google versus Facebook.

Pivotal Research uses Nielsen’s DCR to monitor the consumption on digital media, such as handsets, tablets, desktop computers and other personal devices within the U.S. by audiences 18 years of age and older.

YouTube continues to grow its consumption of more than 20% year-over-year monthly. Other Google properties expanded by more than 33%. The measurements include time spent with content tagged with a Google URL, which would also include AMP-delivered content for other publishers’ properties, he wrote.

Facebook lost 5% in aggregated time spent despite an increase of about 4% in users, which reflects an 8% decline per person. Instagram -- which represents around 10% of use for Facebook’s core property -- performed better with a gain 22% of time spent on the site, gaining about 14% more users and 7% increase in time per user.

Verizon-owned properties such as Yahoo and AOL held a “solid No. 3 position in the industry,” increasing 5.5% sequentially. Amazon, including Twitch, accounted for 2.1% in January 2018 versus 1.9% in January 2017.

And while consumption rates are not directly related to monetization in the near term, he wrote, these changes demonstrate the appeal of different platforms to consumers that indirectly impact advertiser sentiment that ultimately provide increases or declines of longer-term growth.