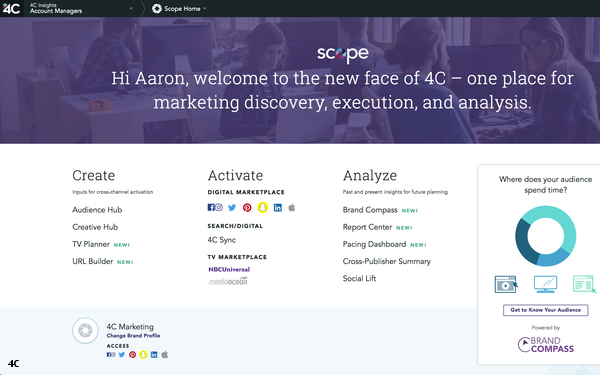 The new tool is called Scope, and it includes cross-channel measurement, intelligence and activations from social media companies like Facebook and Twitter, TV marketplaces such as MediaOcean and NBCUniversal, and newer platforms like Snapchat and Apple News.

“We are trying to help brands move from channel-centric marketing to audience-centric marketing,” Aaron Goldman, CMO of 4C, tells Digital News Daily. “Rather than thinking about where are the different places that [they] can buy media, or try and get some owned and earned media, we want them to think about who are the people that [they] need to reach, and what are [those people] interested in.”

Scope brings together tools for creating campaigns, marketplaces on which to deploy those campaigns and then tools for measurement and analytics.

While many of the pieces of the Scope platform have been available for some time, the new platform brings them together in one place, and also adds new functionalities.

One of the centerpieces of the new platform is a tool 4C calls “Brand Compass.” Built on the company’s proprietary “Affinity Graph,” the company uses data from social media, TV and other digital platforms to try and deliver actionable intelligence about specific brands and the consumers that have an affinity for them.

So, for example, an auto manufacturer could learn about the different "personas” of people who are heavy fans of the brand, along with subjects they care about, like STEM education, or that they enjoy online shopping or yoga.

Users can also look at the data for competitors, or other companies in other sectors.

“This was data that was primarily locked inside the campaign management workflow, of buying ads on Facebook and Instagram to Twitter or even television,” Goldman said. “By bringing these things together, you can get some really rich information that goes well beyond just optimizing your campaign. It can go toward informing your marketing strategy.”

Elsewhere in Scope, users can look at the ad creative that has already been deployed, and easily view where it aired, the completion rate and the social media impact, which tracks social engagement immediately after an ad runs, and compares it to the moments preceding the ad airing.

4C says the platform will have more than 1,000 advertisers on board at launch, after doing limited testing with a small number of beta testers. The company says that nearly $2 billion in paid advertising will run through the platform.