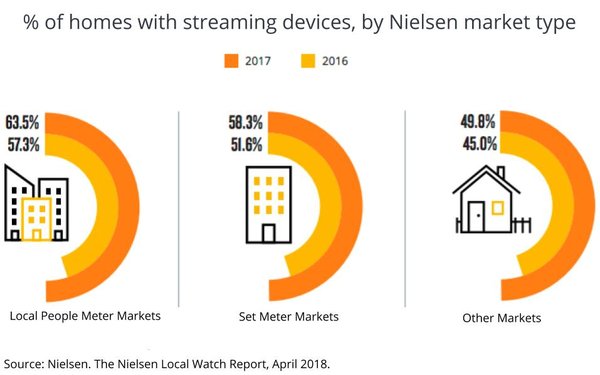 The type of content that consumers stream -- and the platforms they use -- continue to evolve.

For example, there was a time in the not-too-distant past when most people would save local news viewing for their living rooms.

Specifically, 40% of U.S. respondents completely or somewhat agree that it’s important to use social media sites for local information.

More broadly, more than 65 million U.S. homes (of about 59%) owned a device capable of streaming content to their TV as of last November.

Such access still varies by market, and while greater concentrations still exist in urban areas, midsize markets are showing more growth. For instance, San Diego is currently winning the over-the-top (OTT) race, with 71% of homes having access to an enabled streaming device.

Not surprisingly, streaming devices are still attracting a young, affluent audience. For example, homes where the head of house was less than 35 years old were 34% more likely to have a streaming device than the average home.