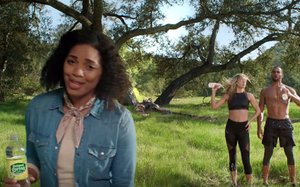 Nestlé Waters N.A. is rolling out a major campaign for the launch of the sparkling versions of its regional spring water brands.

Individually branded versions of the TV/digital creative, from 360i, are being used by all of the regional brands: Poland Spring, Arrowhead, Deer Park, Ozarka, Zephyrhills and Ice Mountain.

A 15-second TV ad (Poland Spring version below), set in a wooded landscape, has a spokeswoman in the foreground drinking from a bottle of the new sparkling water, with buff male and female models in the background pouring bottles of unidentifiable water over their heads, in slow-motion format.

Message: “New Poland Springs Sparkling is made with real spring water. It’s so refreshing and delicious, you don’t need slo-mo models to sell it.”

“Product source is as important to our consumers as it is to us,” said Rosa Veliz, brand manager for Nestlé Waters’s regional spring water brands. “There are a lot of new sparkling water brands out there creating a lot of hype, but we believe in real, simple ingredients, like 100% natural spring water — not image or gimmicks.”

Nevertheless, the company made a considerable investment in new packaging for the new line. Its new PET bottle is designed to resemble vintage glass and highlight the movement of the bubbles, as well as be more comfortable to hold. The bottles also bear a label featuring more prominent branding, as well as fruit imagery corresponding to the nine fruit flavors being marketed (there’s also a plain variety). Twelve-ounce cans are also available.

The sparkling water category grew by 70% between 2011 and 2016, according to Euromonitor International, and is expected to exceed $3 billion by 2022.

Antonio Sciuto, executive vice president and CMO for Nestlé Waters N.A., told Bevnet that, based on trade acceptance, the regionally branded sparkling line, which hit shelves in February, was already the most successful launch in the company’s history.

The regional brands, which generate a combined $2.5 billion in annual sales, have a 38 million household penetration, with just 7 million currently consuming any sparkling water. Sciuto predicted that the line will create “disruptive growth” in the category because “we are adding to the party 31 million households that love and trust and consume on a daily basis our regional spring water.”

The campaign also includes paid advertising on Facebook and Instagram. The new TV/digital ad is already being promoted on the regional brands’ social channels, including Facebook.