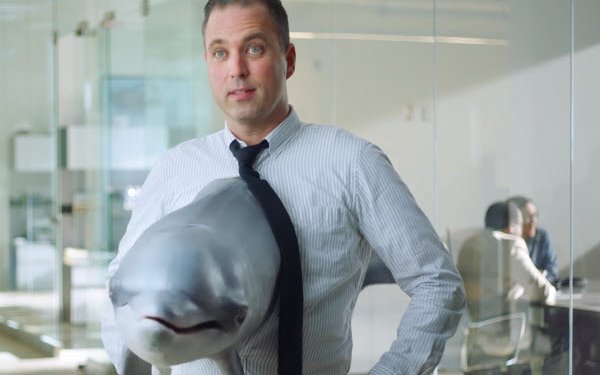 The Wonderful Company’s campaigns are known for over-the-top humor, to put it mildly.

Its famed, edgy “Get Crackin’” ads for Wonderful Pistachios were just last week joined by outrageous new creative for the nuts’ “no shells” variety: The Venus de Milo, brought to life, shown shopping at the mall and attempting to hail a cab, among other activities.

Now, the company’s POM Wonderful brand is following its initial “Crazy Healthy” spots — featuring antioxidants in the form of a pomegranate-colored cyclops and a samurai warrior, who show up in mundane settings like the office — with an even more surreal concept.

This time, POM is humorously dramatizing the power of its antioxidants — and parodying the clichéd approach of pharmaceutical commercials — with a series of spots telling the story of average guy “Jeff Kowalczyk,” who nearly died after being impaled by a dolphin.

“But he hasn’t let that stop him — in fact, he feels better than ever,” declares a matter-of-fact voiceover, as Jeff is shown going about his daily activities at the office, home and gym, with a live dolphin sticking out of his body (90-second version below).

Seems that the dolphin health scare caused Jeff, who had been living a less than healthy lifestyle, to start exercising, lose weight and, of course, begin drinking POM Wonderful, “the antioxidant superpower,” as part of his regime.

The campaign’s approach was inspired by brand research showing that, in many cases, people begin consuming POM Wonderful after a health scare inspires them to a healthier lifestyle.

“As you start to get a little older, thinking about your health is never fun, yet nothing could be more important,” said Darren Moran, chief creative officer of Wonderful Agency, the in-house agency that created the campaign. “We came up with the metaphor of dolphin impalement to make the subject of health scares a little less, well … scary, and to deliver the POM message in a way that’s impossible to ignore.”

Three 30-second variations on the dolphin theme are viewable on the brand’s YouTube page.

The campaign marks POM’s largest digital investment to date — part of a multimillion-dollar media plan “hyper-targeted” to reach health-conscious consumers, according to the company.

The spots will air on TV shows including “The Doctors” and “Dr. Oz”; on sites including WebMD, CNN Health and FoxNews Health; and on screens in doctors’ offices across the country.The campaign also includes social media and PR.

POM has seen strong sales, including some highest-ever sales months, over the past year, according to Wonderful Company VP of Marketing Adam Cooper.