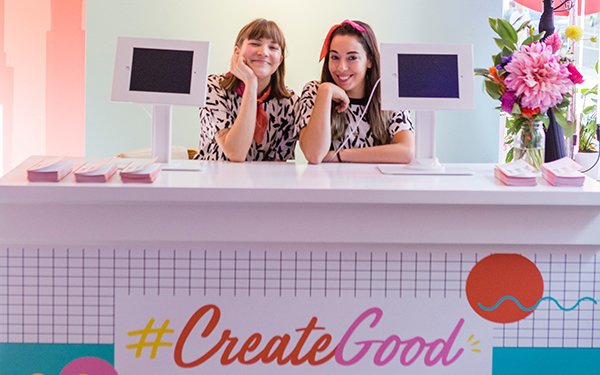 Brit + Co is expanding its #CreateGood events to Los Angeles this summer, after the successful launch of its first event in the series in New York City last year, which drew 10,000 people over five days.

Since 2013, when Brit + Co launched its first event, the Re:Make conference in San Francisco, event-based revenue has doubled every year for the company, Brit Morin, founder and CEO of Brit + Co, a digital media company aimed at millennial women with DIY and lifestyle content, told Publishers Daily.

“We have a large audience in the LA area, but also love it for the creative community of artists and entertainment professionals — both of which are adored by our audience,” Morin noted.

Last year's #CreateGood was profitable, and one-third of Brit + Co’s revenue in 2017 did not come from advertising. Events are “already a significant part of our business,” Morin said.

Over 1,200 showed up for the six ticketed events at the New York event last October. Tickets went for about $20. Sponsors included Kia, Lyft, Sorel and Talenti, among others.

Morin said the events this year have “plenty of brand sponsorship opportunities,” including sponsored workshops, content sessions and branded activations.

The event in Los Angeles will span across a month — August 24 to September 27 — in a 15,000-square-foot space on the 3rd Street Promenade in Santa Monica, via a partnership with Macerich, a real-estate investment trust.

“Because of this partnership, we now have access to a massive, two-story location, right in the heart of Santa Monica — perfect for foot traffic of locals and tourists alike,” Morin said.

The event space will be open daily to paid ticket holders and will have more of a "museum format." It will also feature hands-on activities, programming and merchandise for sale.

Last year in NYC, attendees “were clamoring to buy the silk scarves we designed and made for our staff, so we thought merchandise was important to include in the experience this time around,” Morin said.

The space will host a selection of rotating local makers and their goods, which the company believes will encourage people to return to the space to discover new products for sale.

#CreateGood in New York City will be held in October, with a similar format to last year’s. Ticket-holders will be able to attend events at night (such as panels, interviews and activities), and the space will be free to the public in the daytime.

“We're excited to test both formats this year,” Morin said. Brit + Co will create digital content around the events for those who can't attend.

“Connecting online communities and offline communities has always been an important part of our brand,” Morin said. “These experiences continue this by engaging our consumer in-person and online, tying to themes that inspire them to action, and giving them something to walk away with — either tangible or something they have learned can actually implement into their lives.”

Tickets to the Los Angeles event are on sale now for about $35 a day.
events, los angeles, millennials, women
Next story loading