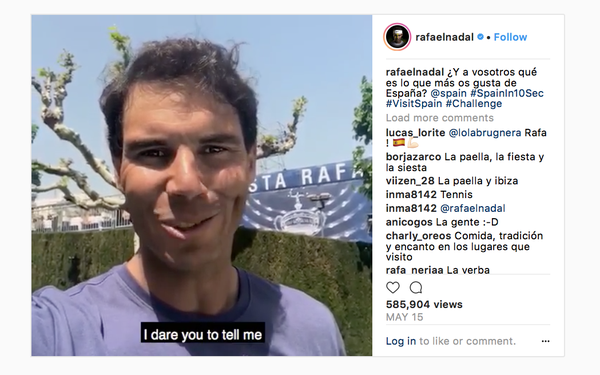 Spain chose wisely when it enlisted celebrities to talk about their experiences and preferred destinations in a new tourism campaign.

One of the 10-second videos was created and posted May 15 by Rafa Nadal, who went on to win the French Open in straight sets on June 10.

The campaign in which personalities from the fields of culture, cinema and sport encourage consumers to fall in love with the country also features 2017 Masters Tournament winner Sergio García and actress Elsa Pataky.

The digital marketing campaign was developed by Ogilvy & Mather Madrid for Turespaña, a public body attached to the Spanish government’s Ministry of Energy, Tourism and Digital Agenda.

It can be viewed at www.spainin10sec.com and on the Turespaña social networks (IG: @spain | TW: @spain | FB: Spain.info) or via the hashtag #spainin10sec.

Nadal, whose Instagram post has garnered more than a half-million views, said “the beach, the food and playing sports” are what he loves about Spain.

García invites everyone to play golf in Spain at any time of the year, thanks to the climate. He does so from the Valderrama Golf Club in San Roque (Cádiz), one of the many top-class golf courses in the country. He also urges everyone to discover the coastal town of Peñíscola in his native region, Castellón.

Pataky reveals two of her passions in her video: shopping in the Born district of Barcelona and enjoying the “Madrid nightlife” on one of the terraces offering views over the city.

Rojas Marcos uses his video to show off the architectural and cultural complex that is the City of Arts and Sciences in Valencia, designed by Santiago Calatrava.

Gastronomist Juan María Arzak, one of the Spanish chefs from a restaurant with three Michelin stars, underscores the prominent role Spain plays in cutting-edge cuisine as he offers us a glimpse of his haute-cuisine laboratory and restaurant in San Sebastián.

Dancer Tamara Rojo, artistic director of the English National Ballet in London, shows off her beloved Royal Theater in Madrid, as well as views of Toledo, the ancient “City of Three Cultures,” from one of its many vantage points.