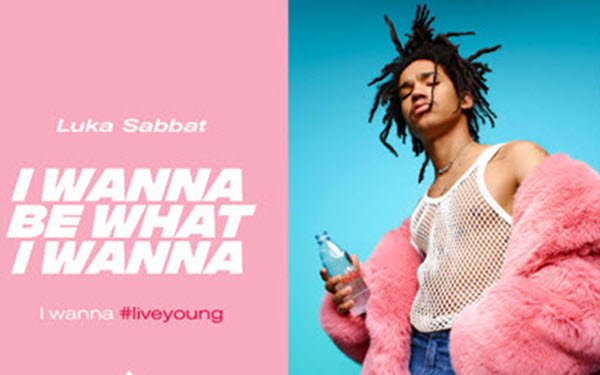 After nine years, Evian has ditched its famed babies creative in the U.S., in favor of a quite different take on its ongoing, global “Live Young” platform.

The new U.S. campaign from Evian’s digital agency of record, AKQA, is dubbed “I Wanna #Liveyoung.”

The creative aims to celebrate “multi-dimensional” people of all ages who are “insatiably curious, playful and progressive,” in the words of the brand.

The ungrammatical copy declarations — including “I wanna be what I wanna,” “I wanna be fearless” and “I wanna be bold” — are attributed to tennis stars Maria Sharapova (also a business entrepreneur) and Madison Keys (also a leader in the movement against cyber-bullying), and to new Evian brand rep Luka Sabbat, described as an entrepreneur/model/designer/altruist.

They were chosen because of their multi-faceted lives and “refusal to be defined or take just one path,” according to Evian.

The campaign is set to launch on July 16 with outdoor billboards across Los Angeles and New York, including a takeover of the Bryant Park subway station in New York.

On social, the brand is using several local influencers in the two cities to share their own inspirational “I Wanna” stories.

Events will include an “immersive experience” by SBE at New York’s Hudson Hotel, with appearances by the three brand reps, (August 23); and a forum with anti-bullying organization FearlesslyGiRL for teenagers, Keys and other role models (August 20).

As part of its sponsorship of the U.S. Open this year, in August, Evian will offer attendees the chance to help create an interactive “I wanna” campaign billboard. And during New York Fashion Week in September, the brand will showcase an elevated version of the campaign creative at Spring Studios.