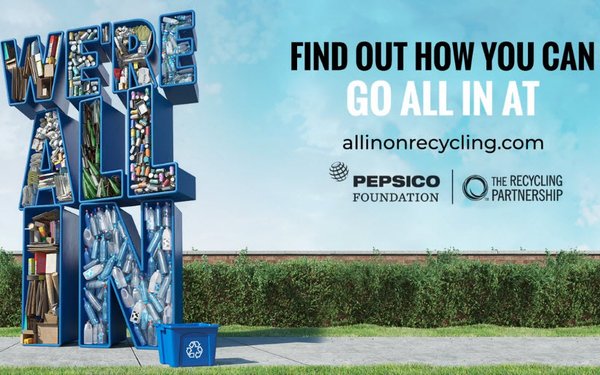 Given how heavily Gens X and Y weigh sustainability in judging brands and products, it’s not surprising that companies across most industries are investing more than ever in sustainability initiatives. Increasingly, that means going beyond recycling, to support a “circular economy” that aims for zero waste at the end of the production cycle.

That’s certainly true in the food and beverage industries, where packaging waste is highly visible to consumers, and activism is on the rise.

Trying to turn this negative into a positive is a competitive imperative for restaurant brands (hence the recent commitments from major QSR brands to finding alternatives to plastic straws and foam cups), and certainly for growth-challenged traditional CPGs and beverages.

Case in point: Kraft Heinz and PepsiCo announced major expansions of their sustainability efforts on the same day (July 31).

Kraft Heinz announced that it intends to make 100% of its packaging globally recyclable, reusable or compostable by 2025.

“Our collective industry has a massive challenge ahead of us with respect to packaging recyclability, end-of-life recovery and single-use plastics,” said Kraft Heinz CEO Bernardo Hees. “Even though we don’t yet have all the answers, we owe it to current and future generations who call this planet home to find better packaging solutions and actively progress efforts to improve recycling rates.”

The company said that it is already working with Environmental Packaging International (EPI) on consulting, tracking and other services relating to packaging, and will be working with other packaging experts, organizations and coalitions to devise sustainable solutions. It also committed to continuing its work to reduce packaging sizes and to using more recycled materials.

Kraft Heinz stressed that while the 2025 global packaging target is new, it’s been working for years to reduce packaging volumes.

The company reports that it recently exceeded its commitment to reduce the weight of its global packaging by 50,000 metric tonnes, and is working in Europe to make the recyclable Heinz Tomato Ketchup PET plastic bottle fully “circular” by 2022, by using recycled material that can be made back into food-grade packaging. It said it’s also joining the Science Based Targets Initiative and working to set science-based greenhouse gas emissions reduction goals in its supply chain.

The PepsiCo Foundation and the national nonprofit The Recycling Partnership, meanwhile, announced that the foundation is donating $10 million to help jumpstart "All In On Recycling,” a new program to make recycling easier for 25 million families across the country.

Described as the largest-ever residential recycling challenge, the initiative aims to raise $25 million in donations from companies and organizations. In addition, contributions from more than 2,800 participating communities are expected to bring the total funding to $100 million.

According to The Recycling Partnership, 94% of Americans want to recycle more, and would do so if given ready access to recycling containers and clear information about recycling practices. But because of obstacles including lack of infrastructure, less than half of eligible materials are actually recycled.

The Recycling Partnership estimates that the challenge will result in capturing 1.9 million tons of recyclable materials over the next five years, including seven billion bottles and cans. That would result in total greenhouse gas avoidance of 5.5 million tons of CO2 — the equivalent of taking more than 1 million cars off the road for a year, according to the organization.

Half of the total funds raised by the challenge are earmarked to provide curbside carts to more than 550,000 households, and the infrastructure needed to recover recyclables from multi-family homes such as apartment buildings and condos. The other half will support recycling education and operational programs.

Recycling solutions will be provided to areas and cities across the country, including Michigan, Central Ohio, Miami, and El Paso, Texas.

PepsiCo — along with Coca-Cola, Keurig Green Mountain and numerous other companies — are ongoing funding partners of The Recycling Partnership.

The All In On Recycling program is part of PepsiCo’s broader sustainability program, whose goals include to design 100% of its packaging to be recyclable, compostable or biodegradable; to increase recycled materials in plastic packaging and reduce packaging's carbon impact; and to increase recycling rates. PepsiCo and its foundation have invested some $55 million in recycling efforts in the U.S. in the past nine years, according to the company.