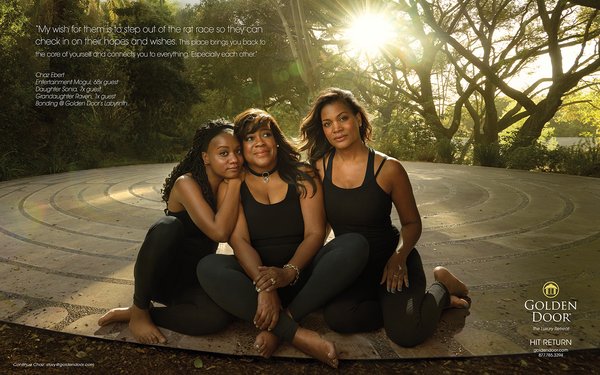 Destination spa Golden Door’s new campaign resulted in celebrities both in front of and behind the camera.

Leibovitz is a “master storyteller who captures her subject’s inner essence with striking insight and humanity,” says Kathy Van Ness, chief operating officer of Golden Door. “Her artistic vision aligns so well with our mission here at Golden Door. We were absolutely ecstatic when she signed on to do it.”

Each ad in San Marcos, Calif.-based Golden Door’s “Human Again” campaign features well-known guests who tell first-person stories of personal transformation sparked by their experiences at the luxury retreat. While Golden Door has always elevated the concept of retreat to a higher level, the message is that no matter who you are, the greatest luxury of all is becoming human again.

The national campaign launched with full-page spread ads in The Hollywood Reporter, and will include outdoor, digital and social media. It is the biggest campaign the resort has ever undertaken, Van Ness tells Marketing Daily.

This is the first time the brand has used a celebrity photographer and featured celebrities in the ads.

“We never show ‘resort’ shots to differentiate from the hospitality sector,” she says. “Instead we focus on symbolic, intriguing visuals with a zen, Asian feel. The property is modeled after a Japanese ryokan, country inn experience.”

The positioning in the last campaign was the same: Golden Door is the ultimate experience in which the real destination is the luxury of returning to what’s important to you.

“The Human Again campaign is the peak execution of our brand,” Van Ness says.