Summertime, And The Grilling Is Sleazy: Brand-Safety Incidents Reported By RTB House 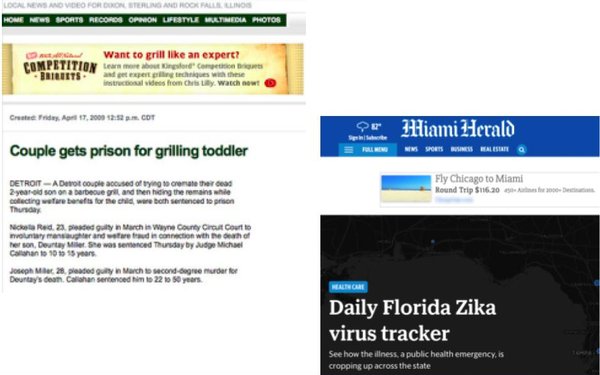 They say a picture is worth a thousand words. But when it appears adjacent to the wrong editorial content, it can cost millions.

Consider the two real-world ad placements depicted here. The one on the left shows a banner ad for Kingsford’s BBQ briquets running on top of a home page featuring a story about a Detroit couple going to prison for “grilling” a toddler on their BBQ. The one on the right shows a banner promoting flights to Miami atop a Miami Herald story on its “Daily Florida Zika virus tracker.”

Brand safety is not new. Long before digital media, agencies, brands and various content screening services would screen TV, radio, magazine and newspaper content to ensure it was appropriate for a brand to appear in. But the nature of programmatic’s high-speed, automated ad serving has created new opportunities for ads to appear in some questionable environments.

The examples depicted here and a number of others, were provided to RTBlog by programmatic retargeting firm RTB House to illustrate the problem it says it can solve with a new “deep learning” service whose natural-language processing algorithms can weed out unsafe or unsavory ad placements.

The new service will be unveiled officially later this week, but RTB House calls it a “game-changer.”

The platform is launching with an audit of more than 16,000 of “the most popular global articles” each day, but RTB House says its goal is to audit the top 50,000 articles.

Brand safety is not a new problem for Madison Avenue, but it is one that is growing as fast as the supply of buyable media. The number of possible permutations is incalculable -- and can't be managed by people alone.