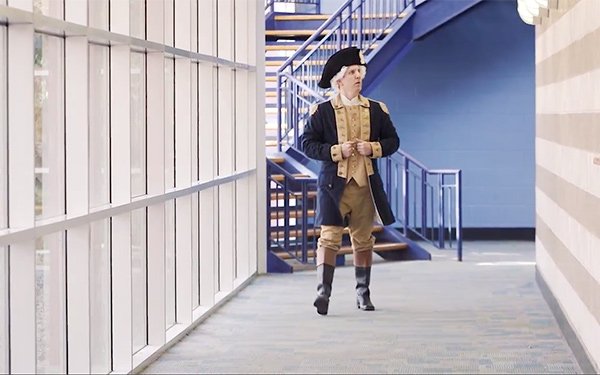 While most tourism bureaus introduce lavish beach scenes and culinary delights, the Fayetteville Area Convention & Visitors Bureau is more pragmatic about its region's tourism opportunities. Simply put, people are merely passing through the I-95 corridor to get somewhere else.

The tourism group's new campaign, created by Raleigh, NC-based shop The Republik, avoids even mentioning “visit,” “stay” or “come," nor are any attractions shown. Instead, it takes a patriotic approach.

The creative intermixes characters dressed up like George Washington, Abe Lincoln and Lady Liberty as they interact with regular residents. Lincoln does a little yoga and Lady Liberty rides a motorcycle around town.

These "America Groupies" spots all end with the campaign tagline "Be Fearless."

The messages aim to make the town an appealing stop-over, meal, or maybe the night as travelers venture down to Florida, says Robert Shaw West, executive creative director, The Republik. “A two-night stay would be a home run."

The spots target car travelers 25-40, from the Northeast corridor and west to Cincinnati and Chicago. They are supported by promoted posts on Facebook and Twitter. Ads are designed to be shared by local bloggers (especially military moms and spouses), area businesses and social media audiences.

Also, the three online characters will Tweet and post under the @AmericaGroupies handle, ghost-written by The Republik. These messages will engage with large news and celebrity accounts.

The campaign will feature additional characters later in the year. One likely contender is the town's namesake. Of America’s 15 Fayettevilles, Fayetteville, N.C. is the only one visited by the real Marquis de Lafayette.